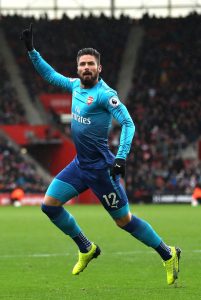 Arsene Wenger has  insisted that  Olivier Giroud will not leave Arsenal in January despite the France striker’s lack of starting opportunities.

Giroud has yet to start a Premier League game this season, but he showed his value coming off the bench when he headed a late equaliser to secure a 1-1 draw at Southampton on Sunday.

It was his fourth league goal in 13 substitute appearances and while Giroud may be growing frustrated at his lack of starts, Wenger is determined to hold on to the player when the transfer window opens.

“Why should we lose an important player?” said the Arsenal manager of a striker who was close to joining Everton at the end of the last transfer window.

Wenger added: “Yes he will start games. It’s always the same when you have many good players, some of them cannot play.

“The question you get is always why does a guy who is good not play? Because if you take him on, you have another guy who is good who will not play. It is as simple as that.

“He will start games because we play every three days. He is mentally very strong and we have to be grateful to a player who comes on when he is needed. It is a remarkable achievement.”

Giroud’s goal, which cancelled out Charlie Austin’s third-minute opener, was the 17th time the France international has scored from the bench, six behind Jermain Defoe in the Premier League all-time list and alongside Ole Gunnar Solskjaer and Kanu.

“I always try to bring something for the team when I come on the pitch,” Giroud said.

“Today we missed players in the box so I tried to bring it. It was a good cross from Alexis.

The point meant Wenger’s side remain outside the top four and the manager admitted his players were still feeling the effects of last weekend’s home defeat of Manchester United when they were caught cold by Austin’s early finish.