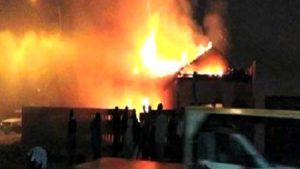 The head office of Saclux Nigeria Limited, the manufacturer of Saclux Paint, was on Sunday gutted by fire in Umuahia, Abia State.

Southern City News learnt that the inferno, which started at about 1.30pm, consumed properties worth millions of naira.

Although the cause of the fire could not be immediately ascertained, men of the Abia State Fire Service were seen battling to contain the fire when our correspondent visited the scene.

An eyewitness, who identified herself only as Ada, said the residents living around the industry got to know of the inferno when they sighted thick smoke emanating from the industry.

She said they had to join hands with some workers in the company to stop the fire from spreading to nearby buildings before the men of the fire service arrived.

One of the firemen, who craved anonymity, said the fire service hurried to scene immediately it received a distress call from a worker in the company.

He urged Abia residents to be careful about the way they handle inflammable materials, adding that they should always contact the fire service on time in the event of any fire outbreak.