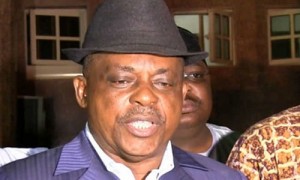 The State Governors who were elected on the platform of the Peoples Democratic Party (PDP)  have said that they supported the emergence of Prince Uche Secondus as the party’s National Chairman because of his strength, character and honesty.

Also, the PDP National Chairman, Secondus boasted that the new National Working Committee would take the party to the Promised Land.

The governors stated that Secondus as the National Deputy Chairman of the past stood for the truth and ensured that rules were followed during party primaries.

They spoke at the thanksgiving service in honour of Secondus at the Rivers State Ecumenical Centre in Port Harcourt on Sunday.

The Rivers State Governor, Chief Nyesom Wike, said every governor gave testimony on how the national chairman stood firm for the right thing to be done.

He said as the Deputy National Chairman, Secondus relegated monetary considerations and always ensured the promotion of the PDP interests.

Wike said that Secondus insisted on his emergence as the PDP governorship candidate because he felt it was in the best interest of the party, even though other groups preferred an ethnic candidate.

He said, “This position is an opportunity to give Nigerians what they want. I can’t understand why people are suffering untold hardship. Imagine the fuel scarcity with people buying a litre of fuel between N300 and N400.”

The governor said that Secondus emerged through a credible process where all candidates tested their popularity.

He said the governors and other stakeholders preferred Secondus because of his experience and track record.

“For the first time in the history of our party, we had an election to elect a national chairman. It was not like the case before where the President and governors decided on a consensus candidate,” Wike said.

In his remarks, the Cross River State Governor, Prof. Ben Ayade, said that he encountered Secondus when they had a major challenge in the delegate list of the party, but the former deputy national chairman insisted on correcting the illegality without inducement.

He explained that all the governors, who worked for the emergence of the national chairman, did so because of the unflinching support Secondus gave them in the past.