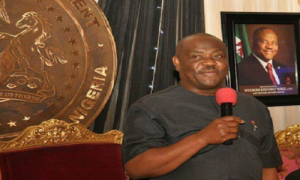 The leaders of the Peoples Democratic  Party ( PDP) have described the governor Nyesom Wike as a man of character, who “is steadfast and committed to nation building and the survival of the party.”

They (Wike and PDP leaders) spoke on Wednesday night during a special birthday service and dinner in honour of the governor at his country home in Port Harcourt.

Wike stated, “I will never do anything that will bring down the PDP. I will continue to work for the party to meet the expectations of Nigerians. Nigerians are waiting for the PDP to rise and save them.

“My advice to the new National Working Committee is that you should endeavour not to fail Nigerians. Don’t compromise, no matter the bait.”

The governor stated that he was strong politically because of the support he had received from the leaders of all the ethnic divides in the state.

He said such support had made it impossible for the APC Federal Government to derail the process of development and rebirth taking place in the state.

Wike added, “I will continue to work for the people of Rivers State and Nigeria because my survival and longevity are deposited in the hands of God.

“God has protected me over the years despite the challenges I have faced. Every additional year is a blessing from God and a call to greater service.

He faulted the celebration of the 10th anniversary of a Supreme Court judgment by a former governor of the state, adding that it was a display of hypocrisy because the ex-governor shut down courts in Rivers State for two years.

He said beginning from Friday (today), his administration would begin the construction of new projects in Port Harcourt, Ikwerre, Ogba/Egbema/Ndoni, Abua, Ahoada East/West and Asari-Toru local government areas of the state.

In his remarks, the Taraba State Governor, Darius Ishaku, stated that Wike had done well for Rivers State and Nigeria, saying he should be celebrated.

Ishaku said the contributions of the Rivers State governor were significant to the revival of the PDP.

In his remarks, the Ekiti State Governor and Chairman of the PDP Governors’ Forum, Ayo Fayose, described Wike as a manifestation of courage and a hope for the downtrodden.

“Our association with him has yielded positive results for the country as we will continue to stand for the ordinary people,” Fayose said.

The Senate Minority Leader, Godswill Akpabio, said the people of Rivers State had every reason to thank God for the gift of Wike, stating that the governor had remained focused in service delivery despite distractions.

Also, the PDP National Chairman, Mr. Uche Secondus, said Wike was a miracle governor that had remained focused in the service of his people and the protection of democracy.

Speaking, former Chairman of the National Caretaker Committee of the PDP, Senator Ahmed Makarfi, praised Wike for being a committed and principled democrat, who supported the committee at a very critical time.