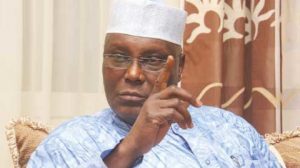 Former Vice President Atiku Abubakar has urged those who who defected from the Peoples Democratic Party to other political parties in the run-up to the 2015 elections to return to the former ruling party.

He said there “is no other political party” in the country apart from the PDP.

Atiku spoke in Abuja on Tuesday when he paid a courtesy call on the national leadership of the party at its national secretariat in Abuja.

The former Vice-President had resigned his membership of the All Progressives Congress about a week ago but refused to name his next political destination.

But on Sunday, he announced that he had returned to the PDP which he left in 2014 with others to form the APC.

While leaving the PDP then, he had said the APC would be his ‘last bus stop’, vowing never to return to the former ruling party.

Accompanied by his loyalists and praise singers, Atiku, who had never hidden his desire to be the President of Nigeria, recanted, heaping praises on the Senator Ahmed Makarfi-led National Caretaker Committee of the PDP for remaining steadfast.