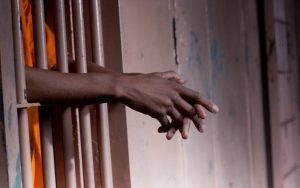 There was confusion at the Ekwulobia prison in Anambra State on Friday when an inmate, Tobias Mbaekwe, who was granted amnesty by Chief Judge of Anambra State, Justice Peter Umeadi, on health grounds, declined the pardon.

Mbaekwe, from Ozubulu in Ekwusigo Local Government Area of the state, was among 13 others freed in the exercise.

The defendant fell on the floor shortly after the ruling that he should be freed on bail, begging the Chief Judge to allow him stay back in the prison, where he said his life was better secured.

He informed the court that his relatives would gang up and kill him if freed.

He said, “They said they will kill me if I come back home. They grabbed my father’s land after killing him in 1980. They latter kidnapped me and threatened to kill me and that is why they abandoned me here since 2012,” he cried.

The judge directed that the defendant should be visited every three months to ascertain his situation.

Justice Umeadi said the culprit could be re-arraigned anytime the police would want to prosecute him.

The Chief Judge also discharged a 34-year-old Obinna Nwankwo Udemgba, who was detained since 2013 without prosecution.

Ruling on Udemgba’s case, Justice Umeadi discharged him (Udemgba) on the grounds of unnecessary delay by the Department of Public Prosecution to commence trial on the matter brought against the him as well as the attitude of the defendant’s relatives who abandoned him in the prison.

The CJ said the exercise was targeted at bringing the court closer to the inmates, describing it as part of the corporate social responsibility of the judiciary.

He commended the security agencies, DPP, Prison officers, Red Cross Society, the judiciary and others for their efforts in ensuring that the exercise was a success.

Speaking, the Assistant Controller of Ekwulobia Prisons, Mr. Ubaenyi Patrick, described the visit as relief to the prison authorities and family of the inmates.

He said the 80-capacity prison facility housed 191 inmates, out of which, 161 were awaiting trial.