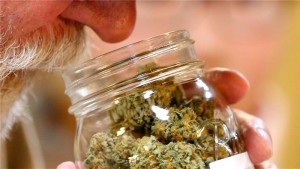 An elderly couple were arrested after they were allegedly caught with 60 pounds of marijuana in Nebraska, United States told police their stash was for Christmas gifts.

The couple — Patrick Jiron, 80, and Barbara Jiron, 83 — were driving on their way from their home in Clearlake Oaks, California to Vermont when police officers from the York County Sheriff’s Department in the Cornhusker State stopped them for failing to use their turn signal.

When the officers stepped up to the Jirons’ Toyota Tacoma, they said they smelled a strong odour of marijuana and found boxes of pot in the pickup topper, according to the Scottsbluff Star Herald.

The octogenarian couple were charged with felony, suspicion of possession of marijuana with intent to deliver, and no drug tax stamp.