Home News Feed Police Chained My Legs And Hands Before Bundling Me From Kaduna To...
Facebook
Twitter
WhatsApp
A BudgiT official who was arrested for allegedly sensitizing citizens of Niger state on constituency projects has narrated the excruciating pain he suffered in the hands of policemen. 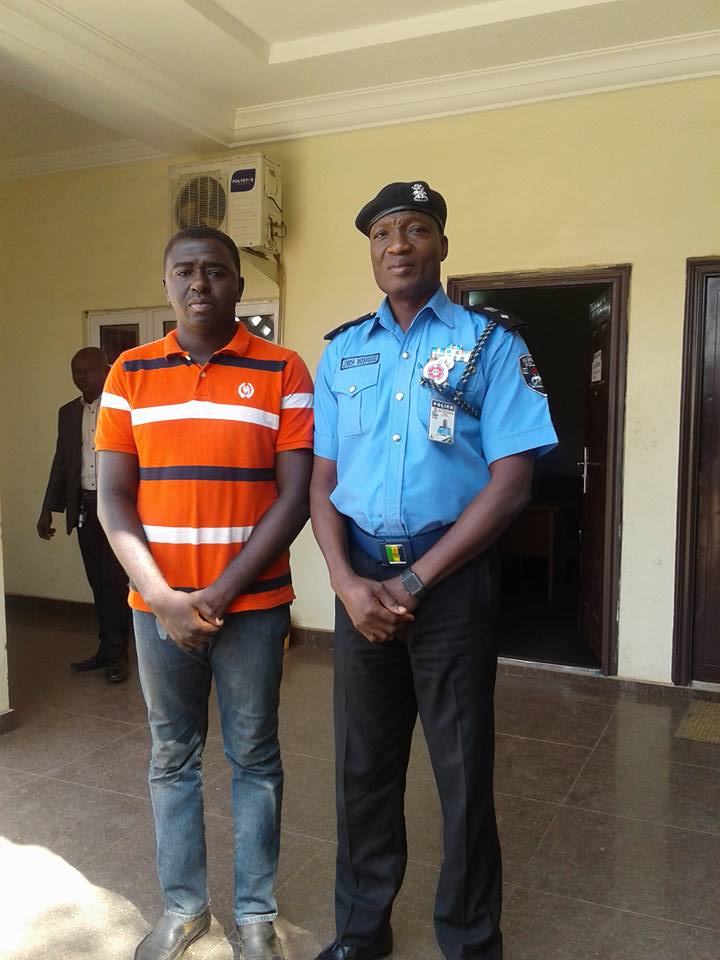 Moses Motoni, an official of a civic organisation, BudgIT, has narrated how his legs were chained and his hands handcuffed to a seat by some policemen who arrested him in Kaduna for holding a town hall meeting in Bida, Niger State, on budget tracking.
Motoni was released by the police in Abuja on Wednesday, after uproar on the social media. He revealed that he saw hell in the hands of police personnel, who dehumanised and treated him like a criminal.
Speaking to journalists on his experience, Motoni explained that he was not informed about his crime, adding that the policemen simply said he was arrested for “inciting the populace and trying to impeach the Emir of Bida.”
According to a report by Punch, Motoni’s troubles began when he visited Niger State last Saturday to sensitise residents of the Niger South Senatorial District to the zonal intervention projects awarded to their constituency in the 2017 budget.
The projects were the installation of transformers and electrification of Nowanya-Tawadzuru, Tiffin-Emitswachi-Tawadzuru and Tako communities in the Gbako Local Government Area, Niger South Senatorial District, Niger State as stated in the 2017 Appropriation Act.
Moroni was arrested on Tuesday after he was tricked into visiting the DHL office at Markafi Market, Kaduna, to pick a parcel.
He was reportedly forced into vehicle and brought to Abuja by policemen who disguised as DHL personnel.
The BudgIT worker explained that he simply enlightened the people about the constituency projects and how to track the budget, noting that he was surprised by the allegations that he wanted to incite the public and impeach the traditional ruler in the area.
He said, “I was arrested in Kaduna and our journey from there to Abuja was hell for me because I was handcuffed on both legs and my elbows were handcuffed to a chair, which dislocated my joints.

“I wasn’t sitting; I squatted from Kaduna to Abuja, which was a journey of about two and a half hours. It was when I got to Abuja that I was told about the reason for my arrest.”
Motoni denied that his engagement with the Bida community would lead to a breach of the peace, noting that the idea of budget tracking was to encourage the community members to engage their representatives at the National Assembly and ensure that the projects were implemented.
“They (policemen) said they got a complaint that I was trying to incite the public, create a breach of trust and impeach the Emir. But this is not true; I went to the community to educate the people on how they can engage their representatives on the implementation of the projects,” he stated.
The civic worker said he was not cowed by his detention, noting that he would still visit Niger State to continue his advocacy.
The team lead, BudgIT, Oluseun Onigbinde, explained that the budget tracking project was meant to simplify the budget and create citizens awareness about the fiscal document so they could demand accountability from their representatives.
He condemned Motoni’s arrest, which he alleged was instigated by the NASS representatives from the area.
He explained that shortly after the town hall meeting, a senator had made a phone call to Motoni, inviting him to a meeting in his house, which he declined “because BudgIT tracking personnel were not allowed to meet with public officials privately.”
Onigbinde said, “After this, we believe the senator reached out to the Nigeria Police Force and accused Motoni of plotting to topple the Emir of Bida following which he was arrested, handcuffed and taken to SARS’ office in Abuja.”
“We condemn this abuse of power by the police and we plan to take up the issue with President Muhammadu Buhari and the Senate President; we will also reach out to the United Nations and the United States on this issue,”he added.