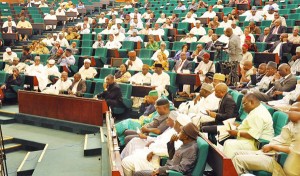 The House of Representatives, on Tuesday, raised queries  over a “purported” presidential approval exempting some special Nigerian National Petroleum Corporation accounts from the Treasury Single Account.

The accounts, with funds worth N50bn, are still being kept by commercial banks in breach of the TSA policy.

The policy provides that all accounts belonging to Ministries, Departments and Agencies of government should be transferred to the TSA.

The TSA, a centralised Federal Government revenue account, is kept by the Central Bank of Nigeria.

A Nigerian firm, SystemSpecs, provides the Remita electronic platform for running the TSA, saving the Federal Government revenue that could ordinarily have been lost.

An ad hoc committee of the House, chaired by a member of the All Progressives Congress from Kano State, Mr. Abubakar Danburam-Nuhu, found out that the NNPC directed some commercial banks to keep the accounts outside the TSA.

The CBN confirmed to the committee that it was aware of the excluded accounts, pointing to a document tendered by the NNPC, indicating that there was a presidential approval.

The said approval was a memo written by the Chief Staff to the President, Mr. Abba Kyari, authorising the NNPC to exclude the accounts from the TSA.

Expressing surprise over the discovery, Danburam-Nuhu stated, “Banks are still holding accounts with funds up to N50bn outside the TSA.

“The banks claim that there is an approval by the President for the accounts to operate outside the TSA.

“These are NNPC accounts and the corporation must produce evidence of the presidential approval.”

A senior official of the CBN, Mr. Dipo Fatokun, confirmed to the committee that the NNPC indeed wrote to inform the apex bank of the exemptions.

However, he specifically mentioned accounts relating to JV operations as the NNPC accounts covered by the exemptions.

“The banks are actually holding some accounts. We are aware. It’s not yet a case of 100 per cent transfer to the TSA,” he explained.

He also informed the committee that some accounts, still being kept by the banks, had legal limitations, while others were accounts owned by the judiciary and the National Assembly.

A memo by Kyari, purporting to convey President Muhammadu Buhari’s exemption directive, was analysed by members of the committee and was rejected as not convincing.

One of the members, Mr. Edward Pwajok (SAN), said the memo did not say much other than opening with the line, “I have been directed.”

Pwajok added that in the circumstances, the proper thing to do was to summon Kyari to convince the committee that Buhari indeed granted the exemptions.

“Let him come here to show us the evidence of the directive given to him by Mr. President,” he said.

Another member, Mr. Simon Arabo, noted that Kyari’s memo appeared to be an “Executive Order”, which had to be further examined by the committee.

The committee made two rulings: that the Group Managing Director of the NNPC, Mr. Maikanti Baru, be summoned to produce the presidential approval within 48 hours.

It also directed the CBN to submit a reconciliation report on the accounts still with commercial banks before the end of this month.

Meanwhile, the Centre for Anti-Corruption and Open Leadership and the Socio-Economic Rights and Accountability Project, have criticised President Buhari over the exemption of the NNPC’s N50bn from the Treasury Single Account.

The groups said the allegation of N50bn NNPC accounts’ exemption from TSA was capable of destroying the Buhari administration, if found to be true.

This is also as a Second Republic lawmaker and a northern elder statesman, Dr. Junaid Muhammed, said the National Assembly must “immediately begin impeachment procedures against the President” if the allegation of exemption was found to be true.

The CACOL Director, Debo Adeniran, said, “This allegation is beyond just indicting the government; it will amount to a statement of contradictory principles. It will mean that this administration is working on ambiguous principles which fall short of the hallmark of good governance. It will amount to an abuse of office and conflict of interests. We should still believe that it cannot be true and that the President will condescend to engaging in under-the-hand dealings.”