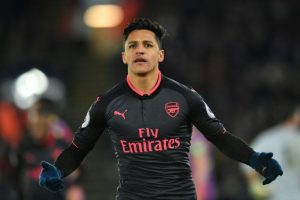 Sanchez’s brace — the second a beauty from Jack Wilshere’s superb pass — added to Shkodran Mustafi’s first ever away goal for the Gunners was just enough to get them past the Eagles in Wenger’s 810th Premier League game as a manager.

James Tomkins’s 89th minute header — Andros Townsend had drawn them level at 1-1 early in the second-half before Sanchez’s scoring burst — ensured a nervy finish, but the Gunners deserved to run out winners and end Palace’s eight-game unbeaten run.

Arsenal drew level with fourth-placed north London rivals Tottenham Hotspur but with a worse goal difference whilst Palace remain firmly embroiled in a battle against relegation just a point above the bottom three.