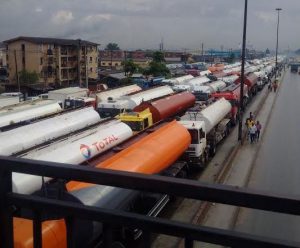 About 144 tankers loaded with petroleum products meant for supply in Katsina and Kano, but diverted, were recovered by security operatives and the monitoring team from the Nigerian National petroleum Corporation, NNPC, on Friday.

About 118 trucks of the products were approved for discharge in filling stations in Kano and environs, while 26 were destined for consumers in Katsina State.

However, the consignments meant to help fill the fuel supply gap in the northern parts of the country were said to have been diverted and stored in a private facility in Kano.

Following a tip off, after reports that consignment of products meant for the state were not delivered at their destinations, the combined team of security operatives and NNPC were said to have traced the tankers to where they were hidden.

NNPC spokesperson, Ndu Ughamadu, said following the discovery, the recovered trucks have since been sent to discharge their products at their designated locations.

“NNPC warns marketers across the country to desist from acts capable of heightening supply gaps noticeable in a few remaining parts of the country,” Mr. Ughamadu said.

He said security operatives have been instructed to go on the trail of any marketer who may had diverted and hoarded products.

Scarcity of petroleum products was the order in most parts of the northern region, including Kano, in the last two weeks. It was not clear if the fuel scarcity situation was as a result of the diverted products.

An official,  in Kano said the consignment may have been diverted to be smuggled out to neighbouring countries up north.