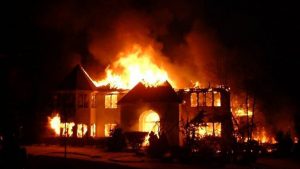 Suspected cult members, according to reports set ablaze a building in Ogwashi-uku, near Asaba, Delta State, killing a woman and her son.

The incident, which was said to have occurred on Friday, also left the husband of the deceased and other members of the family injured.

It was gathered that some yet-to-be-identified persons threw what was believed to be petrol through one of the open windows into the victims’ house on Isah Road in the community.

They subsequently set the building ablaze.

It was said the woman and her son did not survive as sympathisers rushed to the scene to put out the fire.

The source noted that the attack was not unconnected with supremacy war among cults in the community which had reportedly led to the death of over five families.

When contacted on Sunday, the state Police Public Relations Officer, Andrew Aniamaka, said the incident was reported as a fire outbreak.

“The husband of the woman and other survivors are receiving treatment at an undisclosed hospital in the community,” Aniamaka added.

He stated that state police command had commenced investigation to unravel the true cause of the fire.