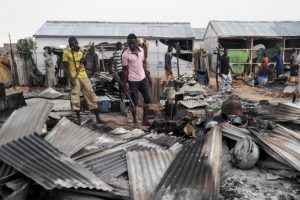 A suicide bomber blew himself up Thursday in a crowded market in Borno State, killing six people, security sources said, blaming the attack on the Boko Haram jihadist group.

The bomber, who passed himself off as a grain merchant, staged the attack in Amarwa village, about 20 kilometres from Maiduguri, the birthplace of Boko Haram and the capital of Borno.

The attack came days after a failed Boko Haram attack on Christmas Day in Maiduguri.

“Six people died on the spot from the explosion while 13 others were seriously injured,” Babagana Kolo, a leader of a militia force helping the army in the fight against Boko Haram told AFP.

“The injured have been brought to the general hospital here in Maiduguri while the dead have been buried in the village,” he said.

Another militia Ibrahim Liman said the bomber went to a provisions shop holding a black plastic bag around 11:30 am (1030 GMT) and asked the shopkeeper if he would buy grains but the shopkeeper said he was not interested.

“The bomber then walked to a group of people chatting nearby and detonated the explosives concealed in the bag he was carrying,” he said.

Amarwa has suffered several Boko Haram attacks in the past eight years in a conflict that has claimed at least 20,000 lives and displaced 2.6 million people.

In recent months Boko Haram fighters have stepped up their attacks on military and civilian targets despite claims by the government and the army that the group was a spent force.