Deolu
It was panic in Olokoro area of Abia state as suspected armed robbers invaded a police station and burnt it down. 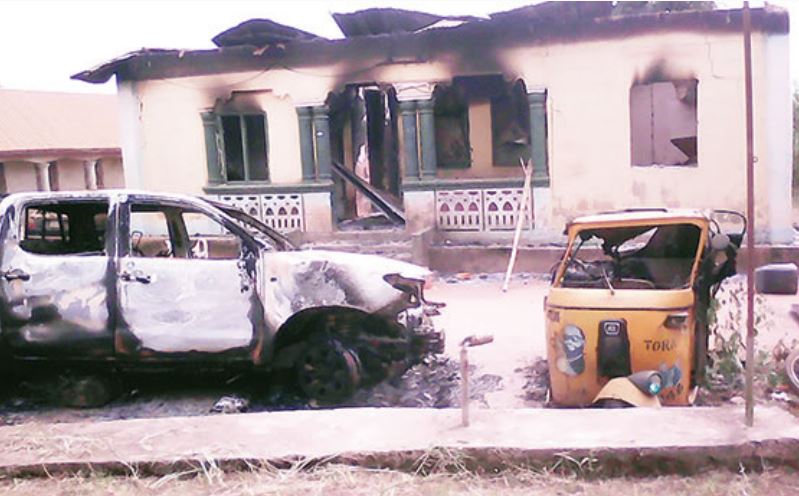 Hoodlums suspected to be armed robbers and drug dealers on Tuesday at about 8pm attacked and burnt down a police post at Ahiaukwu Olokoro, in the Umuahia South local Government Area.
According to Punch, the suspects also burnt one operational vehicle attached to the police station, as well as one tricycle parked at the station. A windscreen of a Volkswagen car parked on the premises of the station. Confirming the attack, the Commissioner of Police in the state, Mr. Anthony Ogbizi said on Wednesday that complaints from the residents about the activities of criminals made the state command to create two posts in the area.
However, no life was lost and no arms were taken away from the station. He said some policemen from, acting on a tip-off, had raided the Ahiaukwu Olokoro area and arrested four suspected drug dealers and armed robbers.
He added that while officers in the post were about to transfer the suspects to the police division at Ubakala, the hoodlums attacked them and aided two of the suspects to escape.
Ogbizi said, “We created  two nipping points in the dustbin area and Ahiaukwu Olokoro because the areas serve as escape routes for kidnappers.  Criminals that smoke hemp and deal in hard drugs also use the Ahiaukwu Olokoro area as a safe haven.
“On Tuesday, our operatives raided Ahiaukwu Olokoro and arrested four hoodlums following a tip-off that the drug dealers were in the area.
“But after the arrest, some suspected hoodlums mobilised and attacked the police post in the area. They were able to aid the escape of two of the criminals with handcuffs, while our officers were moving the suspects to the Ubakala division.
“They later went back and set the police post on fire. The fire burnt down the building with the operational vehicle attached to the post.”
He said the police were not deterred by the attack as they mobilised more men and arrested seven of the hoodlums who attacked the station.
“We are surprised because what happened is a challenge and we cannot give in. If we give in, it will encourage criminals to dominate the community.
“We will hunt down everyone involved and make sure that they face the law.  We promise law abiding residents of the area that they will be adequately protected.” The CP said.