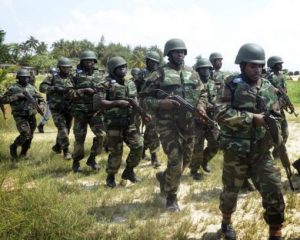 It was gathered that the hoodlums had gained entrance into a military base in the area with the aim of stealing military uniform ostensibly to use it to rob unsuspecting members of the public.

A security source, who does not want his name mentioned, said some soldiers in the base had gone out for patrol within the community before the intruders sneaked in.

Luck, however, ran out of them when they were seen entering the place without permission.

A group of hoodlums had earlier invaded the communities in the area, wearing military camouflage.

It was gathered that the invaders made away with some property after attacking some of the indigenes of the area.

A source in a nearby police station disclosed that some security operatives inside the base immediately shot at the hoodlums while they were attempting to escape with some military attire and other undisclosed items.

He stated that some soldiers, who stayed back to watch over the base had remained calm and watching the movement of the intruders before they opened fire on them as they (hoodlums) tried to escape with their loot, including army uniforms.

Another source identified as Chukwuma said, “The incident caused tension in the community. Some soldiers were at Rumuji-Ibaa junction in search of suspected accomplices.

“Some commercial motorcyclists, who noticed the unusual presence of soldiers at the Rumuji-Ibaa Junction, abandoned their motorcycles and ran away from the place.”