Home News Feed Three Soldiers Were Roasted In Tanker Fire Explosion
Facebook
Twitter
WhatsApp
As many as six human beings including three Nigerian soldiers were burnt to death after a tanker fire tore through a Cross River community. 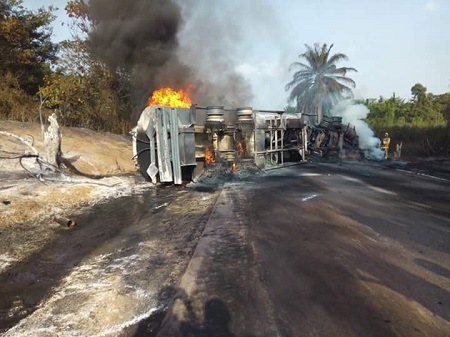 It has been revealed that as many as three Nigerian soldiers were among six people burnt to death in Iwuru,  Biase Local Government Area of Cross River State  Wednesday night when a tanker laden with petroleum products crashed and exploded along the Calabar – Ikom highway.
According to Vanguard, an eyewitness, who gave her name as Agnes, said the incident which occurred seventy kilometres away from Calabar occurred when the taker developed break problem and in an attempt to manoeuvre the truck by the driver no to hit other vehicles that it fell into a ditch.
The soldiers, according to Agnes,  were travelling in opposite direction when the accident occurred actually stopped their vehicle to rescue the tanker’s driver and his conductor when the tanker exploded and the resultant fire engulfed them.
“When the tanker fell into the gutter, smoke started coming out and the soldiers, who were in a vehicle heading to  Calabar quickly stopped their van and went to rescue the driver and the conductor but suddenly the tanker burst into flames and they were caught in the fire,” Agnes said.
She one of the soldiers managed to escape with severe burns and was later taken to the Akamkpa General Hospital for medical attention.
When Vanguard reporter visited the scene yesterday morning, the fire was still smouldering and the body of one of the soldier was seen lying face down while those of two others were some metres away and left with just bones.
Captain Owolabi, the Army Public Relations Officer for the Akim Brigade of the Nigerian Army,  Calabar,  said he was yet to be briefed on the matter.
“I am not aware of any such incident. Let me confirm and get back to you soon,” he said.