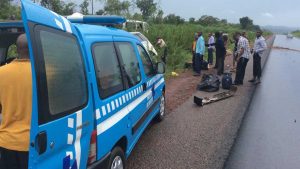 There was unrest in Ugwuoba community in the Oji River Local Government Area, Enugu state following the killing of a motorcyclist in an accident involving a trailer.

The spokesman for the Enugu State Police Command, Ebere Amaraizu, in a statement on Saturday, said the incident occurred on Friday in the Ugwuoba community located on the Oji-River-Enugu Highway.

Amaraizu said a motorcyclist, who was later identified as Jonathan Madu, lost his life in an accident involving him and a trailer that was conveying cattle.

“It was gathered that the trailer conveying cows skidded off its lane and crushed the motorcyclist to death. The motorcyclist was in the other lane. Following the incident, the driver of the said trailer was said to have taken to his heels.

“But the early arrival of police operatives of the Oji-River Division doused the brewing tension at the accident scene as both the motorcycle and parts of the trailer were already burning,’’ the News Agency of Nigeria quoted Amaraizu as saying.

According to him, some cows were recovered while the mangled body of the deceased has been taken to a nearby morgue for autopsy.