Home News Feed I Trekked 30km To Escape Mugabe After He Sacked Me – Zimbabwean...
Facebook
Twitter
WhatsApp
President Emmerson Mnangagwa of Zimbabwe has revealed how he trekked a distance of 30 kilometres to cross the Zimbabwean-Mozambican border amid ‘threats to his life’. 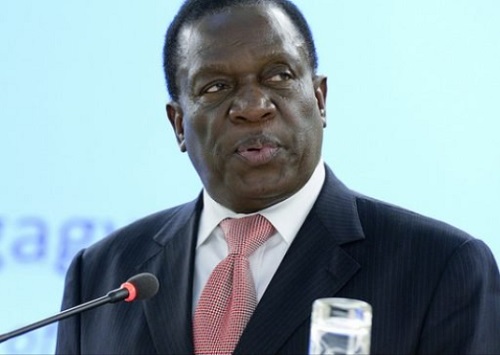 Speaking while addressing Zimbabwean business leaders domiciled in South Africa, President Emmerson Mnangagwa of Zimbabwe, disclosed how he fled to South Africa shortly after his expulsion from government and later the ruling Zanu PF party on allegations of plotting to dethrone his 93-year-old former boss, Robert Mugabe.
According to News Day, the newly-elected president, Mnangagwa paid homage to former Zimbabwe Defence Forces (ZDF) Commander General, Constantino Chiwenga, for facilitating his takeover from Mugabe, who resigned following a military intervention codenamed Operation Restore Legacy.
He said Chiwenga would be “re-assigned very soon”, giving the clearest hint that the retired former ZDF commander was earmarked for the position of Vice-President.
“I came here to pay homage to my brother President Jacob Zuma. I spent a good 16 days as a ‘Diasporan’ here in South Africa after walking some 30 kilometres crossing the border into Mozambique. After I had been fired around 4 o’clock (on November 6), intelligence had made me aware of the next move intended to eliminate me,” Mnangagwa said.
“Fortunately, I found a [business] card in my wallet which bore the name of a colleague here, (Justice) Maphosa, whom I phoned and he picked me. I came here and I was well-looked after,” Mnangagwa said to applause as a bespectacled man believed to be Maphosa stood up to be recognised.
Mnangagwa also revealed he had been in secret communication with Zuma. “I had good communication with the leadership here, not openly, you understand,” he said.
“Then, my colleagues back home asked me to come join them in moulding our future. This is the young man and I have banned him from putting on army uniform anymore. I retired him a few days ago, General [Sibusiso] Moyo,”the President said.