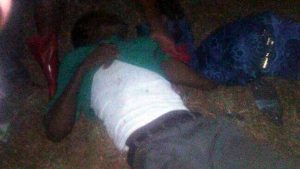 Two persons lost their lives while 21 others were injured last night in an auto crash, enroute Cotonou, Benin Republic on Monday night to celebrate Yuletide.

The Commander of Traffic Compliance and Enlightement Corps, Seni Ogunyemi, confirmed the accident to newsmen.

He said the vehicle involved was a blue-coloured Toyota bus with‎ registration number MUS 974 XT‎. The bus had 24 occupants believed to be mostly Beninoise.

They include four males, 11 females and nine children said to be heading to Cotonou from Ijebu-Igbo town of Ogun State.

Mr. Ogunyemi said the crash occured following a burst tyre, adding that the‎ victims have been taken to hospitals.

He said the hospitals where the victims were taken to as at the time of filing this report include Federal Medical Centre, Idi-Aba,Abeokuta; State Hospital, Ijaiye, Abeokuta‎; and Joseph Christian Specialist Hospital, Oke-Ilewo Abeokuta.

He also disclosed that the corpses were deposited at the morgue of State Hospital, Ijaiye, Abeokuta.