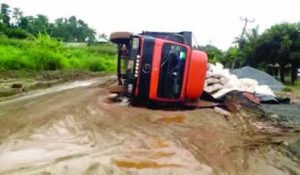 Two persons were confirmed dead reportedly died, while another 21 persons were also injured, sustained varying degrees of injuries in an accident involving a Scannia trailer with registration number ZUR 126 YL.

According to eye witness in Ilorin, Kwara State,five people survived unhurt during the accident along the Jebba-Mokwa/Berger road.

The Kwara State Sector Commander, Mr. Sunday Maku, confirmed the accident. He said it was caused by break failure.

He said 28 people were involved in the accident (17 males, seven females and four children).

He added that two people died, while 15 males, two females and four children were injured.

According to him, N435,000 were recovered from the scene.