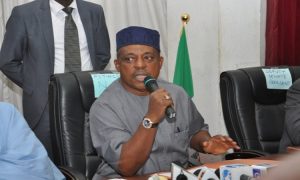 “…the brief tenancy of the All Progressives Congress (APC) in Aso Rock Villa expires on May 28, 2019,” the Rivers politician said.

He scored 2,000 of the total 2,296 votes cast, 87 per cent of the votes cast beating two other contestants at the election held at the Eagles Square in Abuja on Saturday.

Read his full speech below.

PDP – Power to the People

The former President of the Federal Republic of Nigeria, Goodluck Ebele Jonathan GCFR

Your Excellency, the Chairman of the National Caretaker Committee Ahmad Makarfi

Your Excellency Chairman of the Convention committee Ifeanyi Okowa

Chairman and Members of the BOT

Members of the National Caretaker Committee

State Chairmen of our party

Distinguished Delegates to this convention,

Members of the Press,

On behalf of members of the National Working Committee of the Peoples’ Democratic Party, I dedicate this mandate to the Almighty God who it has pleased to make this convention successful and grant us this opportunity to serve our great party. We give all glory to God and we commit PDP into his hands.

I stand before you this day, humbled by the mandate you’ve just given to my colleagues and I to lead this great party at this time in Nigeria’s political history. We wholeheartedly accept it with extreme gratitude.

Eighteen years ago specifically February 14, 1999, this party made history with its first ever national convention in Jos, Plateau State and since then, has grown to become undisputedly, the largest political party on the African continent.

I recall that before that, precisely on the 19th of August, 1998, our founding fathers gathered here in Abuja to give birth to this party whose aims and objectives were patriotic, with lofty and visionary dreams.

By my understanding, the mandate you have given us today is clear and unambiguous. It is to return our party to power come 2019. As Herculean as this mandate seems, I know it’s achievable. My campaign pillars for this election are ‘To Rebuild, Reposition and Regain’. Let me assure you great members and leaders of our party, that by the grace of God and with all hands on deck, the brief tenancy of the All Progressives Congress (APC) in Aso Rock Villa expires on May 28, 2019. By this, we serve them a quit notice.

This has to be immediate, in order to save our beloved country from disintegration. We are all witnesses to how the unity of this country has been shaken to its very foundation under the watch of the rudderless and clueless APC. We therefore have a gigantic task of retrieving this country from APC’s clear lack of direction and confusion starting with the Presidency.

Our party on the other hand, was founded on ideals which are totally in tandem with those of the founding fathers of this great country. Those founding fathers had in mind, a prosperous and lasting democracy as captured in the preamble of our constitution clearly stating their desire for a free and egalitarian society.

Even in our perceived failure of 2015, we chose to abide by our strong faith in democracy, willingly conceding power to opposition, thereby elevating the democratic status of Nigeria. We are the true democrats!
I can therefore say without an iota of doubt, that PDP’s contributions to the growth and sustenance of democracy in this country in the last 18 years remain unequalled. The best way to celebrate the memories of these founding fathers, is to ensure that the ideals are continuously engaged. (At this juncture great PDP leaders and members here present, let us stand and observe a minute silent for our fallen heroes one of whom is our pioneer National Chairman and former Vice President of this country Dr Alex Ifeanyichukwu Ekwueme GCON who passed on recently).

With your mandate I assure you, that all necessary steps will be taken to avoid a repeat of our past mistakes. Indeed we have learnt our lessons and by this convention, we are now set to forge a new path for our great party and Nigeria. Under my watch, internal democracy will be strictly adhered to with a deliberate policy to return ‘real’ power to the people. No more imposition, no more impunity. Every member of this party can from this moment, consider him or herself, an equal shareholder in our common destiny. I call on all Nigerians, of all creed and class, to embrace this new PDP and join in this quest for a new Nigeria. Particularly, I reach out to our old members who for one reason or the other have left the party, to please come back ‘home’.

I cannot end this address without acknowledging my co-contestants especially for the chairmanship position. Truth be told, any one of you is eminently qualified to lead this party. I thank you for a worthy contest and being part of history as this marks the first time such a highly competitive contest to produce the leadership of a political party has been held in Nigeria. You have every cause to stand tall and I now extend my hand of fellowship to you all. Let ‘US’ Rebuild, Reposition & Regain.

In the same breath, let me thank the outgoing National Caretaker Committee led by Senator Ahmed Markafi. We will forever remember your courageous leadership in our most trying times. History will no doubt, be kind to you. I must also thank the Convention Committee led by HE Dr. Arthur Ifeanyi Okowa for a job well done.

Finally in accepting this mandate, I am guided by the words of the 19th President of the United States of America, Rutherford Hayes who said in 1877 “he serves his party best, who serves his country best”

God bless you all

I thank you for listening.