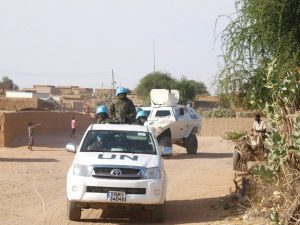 Mr. Kallon condemned the attacks in a statement issued by Yasmina Guerda, the Public Information Officer, Office for the Coordination of Humanitarian Affairs Nigeria, on Monday in Abuja.

According to Mr. Kallon, the attack on humanitarian convoy on December 16, and others in the past pose great limitations on the delivery of life-saving supplies to people in need in north-east Nigeria.

PREMIUM TIMES reported the December 16 attack by Boko Haram with the World Food Programme saying the dead victims include its driver and his assistant.

Mr. Kallon said the December 16 ambush by a non-state armed group took place on the road between Dikwa and Gamboru in Borno, which resulted in the loss of lives of at least four civilians.

He said the attack also led to the destruction of basic aid items initially destined to alleviate the suffering of thousands of women, children and men.

“Violence against convoys carrying humanitarian aid is unacceptable and can result in concerning limitations in our ability to provide life-saving relief to those who need it the most.

“We must ensure the safety of aid workers and aid convoys across the north-east of Nigeria, so people in need of assistance can access it in a timely manner and in sufficient quantity.

“Many lives are at risk,” Mr. Kallon said.

Mr. Kallon said that the United Nations and its partners operate in the North-east of Nigeria in order to provide life-saving assistance to 6.9 million people affected by the brutal conflict.

He explained that humanitarian operations are carried out following the four basic humanitarian principles of operational independence, humanity, impartiality and neutrality and should be respected as such.

The UN humanitarian coordinator noted that since January in spite of major challenges, humanitarian operations in North-east Nigeria had managed to assist more than five million conflict-affected people in Adamawa, Borno and Yobe.

He said that three million people had also been assisted with food security interventions, 936,000 with nutritional support, five million with health care assistance, and more than 1.3 million with safe drinking water.

The News Agency of Nigeria reports that in July, the UN suspended its humanitarian assistance mission in the North-east, following bloody attacks on its officials and other aid groups.

It resumed interventions shortly after with the military combating the insurgents and improving security in the region.