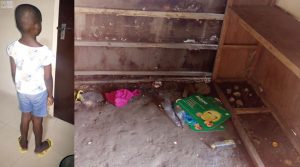 A nine-year-old identified as Emmanuel Ironbar, who was sent away from his home in Calabar, Cross River State, by his stepfather over allegation of witchcraft.

According to reports, Emmanuel was sent out of his home by his stepfather, Mr. Ubong Akpan, for allegedly being a witch.

He told newsmen , “I have slept outside for some months now. I cannot remember how long that was before I was rescued. I was never sent to school, but I take my younger siblings to school, every day on the request of my mother. I also wish to go to school.”

Emmanuel was sleeping outside buildings around No. 28B, Yellow Duke Street in the Calabar-South axis of the Cross River State capital. His stepfather’s action was reportedly based on a claim from a church that the nine-year-old was a witch.

Emmanuel’s case is not the first in Calabar and other parts of the state. On June 17, 2016, two sisters, Aniema and Mary Ekpenyong, escaped lynching after a church in Ikot-Abasi-Effiom District of Akpabuyo Local Government Area of Cross River State, branded them witches.

They were first thrown out of their home by their uncle, identified as Victor, who took them to the church for alleged deliverance.