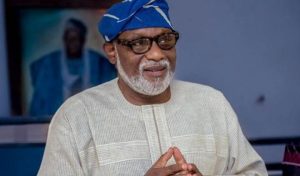 The new year started on a good note for some prisoners in Ondo State as the governor, Oluwarotimi Akeredolu pardoned 12 of the  prisoners in the state.

This was confirmed by  by the state Commissioner for Information and Orientation, Mr Yemi Olowolabi, to journalists in Akure on Monday.

Olowolabi said the gesture was in exercise of the power conferred on the Governor by Paragraph (d) of sub section (1) of Section 212 of the Constitution of the Federal Republic of Nigeria, 1999.

According to him, the pardon was approved by the governor following the recommendation by the Ondo State Advisory Council on Prerogative of Mercy.

“In his letter, dated 27th December, 2017, and addressed to the Comptroller of Prisons, Governor Akeredolu advised that the affected prisoners be released.

“All the prisoners have served portions of their various sentences.

“The governor advised the affected prisoners to make use of the opportunity of their release to turn a new leaf and engage in legal and positive activities that will contribute to the development of the country,” the commissioner added.