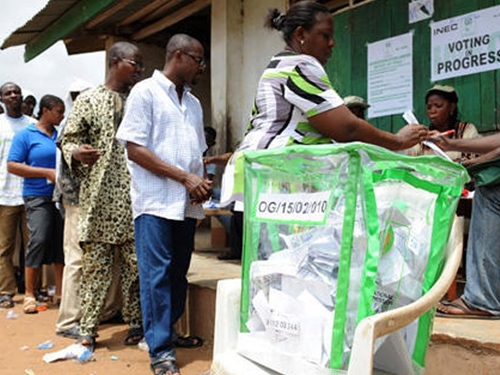 Ahead of the next year’s general elections, a political group being coordinated largely by members of the National Assembly (NASS) and former governors, have concluded plans to build a new platform that would be deployed to ease the ruling All Progressives Congress (APC) out of power in 2019.

One of the promoters of the new group, whose primary objective was to break both the ruling APC and the opposition Peoples Democratic Party (PDP), told Daily Sun in Abuja, yesterday, that the group might in the long run work with the NIM, since both seemed to share the same objective.

Members of the group from the APC, according to multiple sources from the group, were expected to “create crisis” within the APC before the end of the first quarter so as to prepare the ground for their exit from the party or wait till after the party’s convention, which is likely to hold in April, before exiting en mass.

The group, it was further learnt was behind the amendment to the Electoral Act, which altered the order of election. The amendment to be harmonised by the two chambers did not only separate the conduct of the National Assembly election from that of the presidential election, but would also see the National Assembly election holding before that of the president.

Asked what the group would do, ifPresident Muhammadu Buhari refused to assent to the bill, one of the members of the group, a serving lawmaker said:

“Are you not surprised that the thing came from the House of Representatives? That is enough sign for you to know that we are united on this matter. And we are prepared to muster the two-thirds that will see us passing it, should the president decides to withdraw his assent.

“They said Buhari helped us to win election in 2015, is that not so? So let him stand alone, while we also stand alone and let’s see who will fail this time around.

“We are conscious of the general resentment against him, but we have also seen the desperation on the part of our party leaders to give him the ticket.

“The essence of the amendment is to prevent the APC from hoodwinking the electorate while giving Nigerians ample opportunity to reject Buhari through the ballot. We don’t want to confer any undue advantage on him.

“For three years, he did not reach out to any of us. Now that he knows he needs us, he is inviting us one after the other to seek for our understanding and our support.

“If we support him and he returns, knowing that he won’t need us again, what do you think will happen to us?

“In Kaduna, two of the APC senators are not on the same page with the governor. Buhari, his wife, his nephew and even his CSO all live in Kaduna, they have not deemED it fit to intervene in the crisis which may consume the party. So who will work for the party’s success next year?

“In Sokoto, Wamakko, against all odds, bent backwards to accommodate Tambuwal, gave him the ticket even when Tambuwal was not part of his game plan from the beginning. He did that just for APC, so that APC could win the presidential election. He led the most strategic committee that led to the success of the party at the poll.

“But when it was time to nominate ministers, they brought the daughter of a PDP chieftain, who fought Wamakko till the last day as minister from the state.

“The poor man led a delegation to see Mr. President and pleaded with him to reverse the appointment for the sake of APC in the state. Mr. President refused.

“But today, he has invited Wamakko because he needs him now. And you think the man will support him? Look at Goje, the same story. What Yerima? Or is it Saraki? Look, I could go on and on.”

On the membership of the group, the source who is a serving federal lawmaker said, “we are actually more than 40. But for strategic reasons I won’t be unveiling the identities of those involved.

“However, I must confess that the first 20 names you listed are correct. Our group is different from NIM. But we can work together if they drop the idea of supporting a southern candidate for the presidency.

“We are working towards breaking up the APC and the PDP. We are doing this because we know it will be very difficult for an entirely new group like that of NIM to dislodge Buhari and the APC.

Another member of the group who is based in Kaduna revealed: “After our party’s congress last year to elect three delegates per local government, which turned out to be a charade, I told you a new movement was going to take over from the APC, you said it was not possible. Are you seeing the picture now?

“We have gone far in our plans and meetings have been going on. We will soon concretise every arrangement. As at the last count we have 35 senators that have enlisted.

“But I can tell you more are still showing interest. We also have members from the House of Representatives, who have indicated interest.

For those behind the group outside of the National Assembly and the group’s likely presidential candidate, the source responded: “For now, Atiku is not part of it. But Senators Shehu Sani, Kwankwaso, Wamakko, Goje and Yerima are all part of the group.

“Only Tambuwal’s name is on the card for now as likely presidential candidate. But it could change as time goes on because we are reaching out to Asiwaju (Bola Ahmed Tinubu), Obasanjo and TY Danjuma. These people may have some other persons in mind.”

Reminded that Tinubu has since declared his support for Buhari’s second term, the source said, “they have finished him politically. You think he will want to remain with them? I don’t see it happening.

“Look, the betrayal of Tinubu started immediately after the 2015 elections. Then, look at how they played him out in Ondo and Kogi. He has no single nominee in the Buhari’s cabinet.

“And the Oyeguns, Mala Bunis and co that perpetrated all that, are now angling to return as party executives. You think Tinubu will support them to return? That is where the crisis will begin from because the Buhari group wants them to return.

“Saraki has not shown his fingers in the group so far, but there is nothing happening in the Senate that the man does not know about. As a matter of fact, from what I hear some of the lawmakers say, he may end up leading the group.”