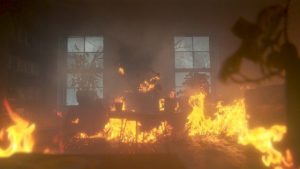 Over 200 shops were destroyed by fire at the Sango plank market on Friday by an inferno that left traders at the market in tears over  their losses.

According to reports, apart from tons of planks that were razed to ashes, several machines were also destroyed. Some of the traders, who spoke to our correspondent, said that each of the machines cost between N1m and N5m.

Men of the Oyo State Fire Service were seen at the scene trying to put out the fire. Their task was made difficult because of the dry weather condition that helped spread the fire to more shops.

One of the traders, Sadiq Adetunji, said that he left the market around 9 pm on Thursday and that there were no signs that by Friday morning, his shop would have been burnt to the ground.

“This is a great loss to all of us. This is the season that we record sales because many people choose this time of the year to complete their buildings. So, we sell more planks for roofing and other building works.

“For the past 14 years, I have run a shop here with a partner and now, both of us have lost everything. We lost two machines valued at around N4m. We also lost all the planks we just bought, which we have not paid for, so we are heavily in debt. We beg the state government to come to our aid,” he said.

Another trader, who lost a fortune to the inferno, Keinde Oladimeji, said that he was called around 3 am by a fellow trader, who informed him about the incident.

He said, “I quickly came here but it was clear that there was nothing I could do. When my wife called to know the extent of the damage, I just told her to go to sleep and that everything was under control. I had to lie because she could collapse. We run the shop together and we recently invested all we had to buy planks.”

Asked if the source of the fire had been ascertained, Oladimeji said that it was likely caused by an electrical fault.

The leader of the market, Abdulakeem Olanrewaju, said he left the market around 10 pm on Thursday and that like others; he was also informed of the inferno early on Friday.

The Director, Oyo State Fire Service, Adewuyi Moshood, said his men responded immediately they were informed about the incident.

He described the incident as unfortunate and urged traders to be more careful in the handling of items, especially electrical appliances and machines capable of causing a fire.