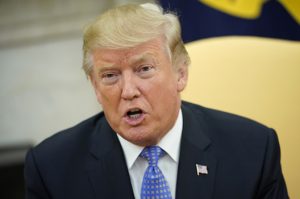 The African Union on Friday blasted President Donald Trump for his profane comments about African countries and other nations, and recalled the U.S.’ history of bringing in slaves from the continent.

Mr. Trump used the words “shithole countries” to describe Haiti, El Salvador and African countries in response to lawmakers who suggested they restore protections for immigrants from there, the Washington Post reported Thursday.

The White House has not disputed the report.

Responding to the remarks, AU spokeswoman, Ebba Kalondo, reminded Trump that many Africans “arrived in the U.S. as slaves,” adding that Trump’s profane statement “flies in the face of all accepted behaviour and practice.”

She described the U.S. as “a global example of how migration gave birth to a nation built on strong values of diversity and opportunity.”

In her statement, Kalonda said the African Union and its partners would continue to address the causes of migration while also fighting against racism and xenophobia.

Others responded to the derogatory slur with humour. “Good morning from the greatest most beautiful ‘shithole country’ in the world!!!” Leanne Manas, a news anchor for South Africa’s SABC broadcaster, wrote on Twitter.