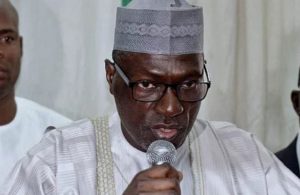 The Kaduna State chapter of the Peoples Democratic Party (PDP) on Friday advised Ahmed Makarfi to contest for the presidency in 2019, and promised to support him if he did.

Mr. Makarfi is a former governor and senator. He was until December the chairman of the National Caretaker Committee of the party.

Members of the party, in a major re-grouping since after the 2015 elections, described the former governor as the “best material” for the nation’s top job.

A former governor of the state, Ramalan Yero, in an address at the meeting, said that the PDP was proud of Mr. Makarfi’s performance during its trying period, when he served as the caretaker committee.

He said that Mr. Makarfi’s ability to organise a successful national convention was also a proof that he was a good manager of situations.

“Clearly, Makarfi is the best man for the top job after successfully leading the party out of the crises that almost confined it to the dust bins of history,” he said.

The News Agency of Nigeria (NAN) reports that Mr. Yero later called for a voice endorsement and received a thunderous support for the former governor.

Earlier, the PDP Chairman in the State, Hassan Hyat, in his speech, said that the meeting was convened to share opinions and discuss strategies toward a successful outing in 2019.

Mr. Hyat said that he was impressed with the turnout of party members and supporters, especially women, who came from all over the state to attend the meeting.

He expressed optimism that the party would soon regain its grounds ahead of the 2019 polls.

NAN reports that if Mr. Makarfi agrees to contest, he would slug it out with many others that had indicated interest in the PDP ticket.