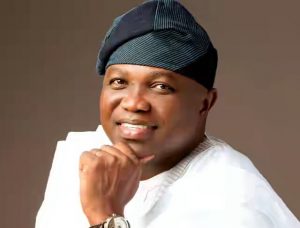 Lagos State Governor, Akinwunmi Ambode has assured Nigerians that 2018 would be another successful political year for the All Progressives Congress in fulfilling it’s promises of developing the state.

Ambode made the promise in Lagos at the One Lagos Fiesta which started on Dec. 24 and ended on Jan. 1 at Eko Atlantic, Victoria Island.

“Congratulations Lagosians as I welcome you into 2018.

“We have every reason to believe that this will be a remarkable and special year for every Lagosian and for our dear state.

“Without a doubt, 2018 will be a unique year in our political trajectory. The Lagos State Government shall not relent in fulfilling it’s promises to you.

“I urge you to expect the very best this New Year, a year that holds such a great promise for all of us,” the governor said.

Ambode wished every citizen, every family and every community a remarkable and prosperous year ahead.

The News Agency of Nigeria reports that over 300 music artistes and comedians participated at the talent hunt competition where three people emerged as winners.

David Adeleke, popularly known as ‘Davido’, during his performance told the technical department to focus the lighting on the revelers to illuminate the crowd as he wished them a happy New Year.

Mrs Angela Obey, one of the vendors, thanked Nigeria Breweries for providing the venue, ice blocks and other stuffs that aided the sale of the company’s brand of drinks.

“Some of my colleagues paid N75,000 for a space to do business here, but we that are selling NB products were offered spaces for free.

“NB has already taken care of all financial commitment and they just provided the enabling environment for us the retailers to take advantage of,” she said.

NAN reports that the security at the venue was tight, while exotic fire works illuminated the skyline as Lagosians were ushered into 2018.