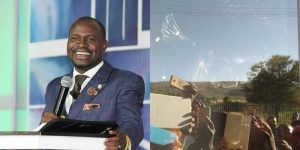 Just days after an angelic being was caught on camera going into Prophet TB Joshua’s church, Synagogue Church of all nations during a deliverance session.

Another incident of another angelic being, was reported at the early hours of Sunday, January 7, an ‘angel’ from heaven appeared in the skies while a fasting and marathon praying session was going on at Prophet Samuel Akinbodunse’s Freedom For All Nations in Pretoria, South Africa.

According to the report now making rounds online, the congregation, intrigued by the ‘divine sight’, put their prayers on hold to go take pictures of the stagnant ‘angel’ who didn’t flap his wings or anything but stayed still in the sky.

During a fasting and a 24 hours marathon prayers with Prophet Samuel Akinbodunse at Freedom For All Nations in Pretoria, South Africa, an Angel appeared in the early hours of Sunday at the 18th hour of the programme at about 6am.

The congregation rushed to have a look and photos were taken. The image caught on camera in full glare of everybody is causing an uproar and has become the talk of the town.

It would be recalled that he made a list of 15 prophecies for 2018 and presently, two of it has been fulfilled.

One of it which include the confession of a south African pastor who uses charm to grow His church and also have wealth, and the death of a popular man of God based in Abuja.