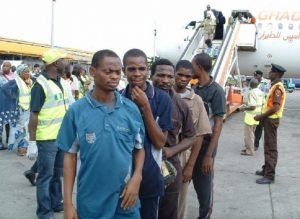 The International Organisation for Migration (IOM) and the European Union (EU) on Monday evacuated 132 more Nigerians from Libya.

The News Agency of Nigeria (NAN) reports that the new batch of returnees arrived at the Cargo Wing of the Murtala Muhammed International Airport, Lagos at 5.30 p.m. on Monday.

They were received by officials of the Nigerian Immigration Service (NIS), the National Agency for the Prohibition of Trafficking in Persons (NAPTIP), Federal Airports Authority of Nigeria (FAAN) and the Police.

An official of the IOM, Frantz Célestin, said this was the second chartered flight by IOM in 2018 making it 313 Nigeria returned so far in the new year.

“Migration is not a problem in itself. It engenders socioceconomic development if properly managed,” he said.

Mr. Celestin affirmed IOM’s commitment in collaborating with Nigeria in ensuring protection and safe arrival of Nigerian migrants from Libya.

NAN reports that 6,806 Nigerians have been returned from Libya in 2017 through the efforts of the IOM and EU.

The Nigerians were stranded in the volatile North African country where they had been stranded enroute Europe and were being subjected to various abuses in the country.