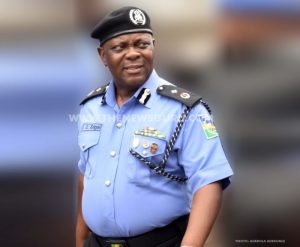 According to the lawyer, Babatunde Ojehomon, the petition was addressed to the Inspector General of Police, Ibrahim Idris, Vice President Yemi Osinbajo, the National Assembly and others.

Ojehomon said at his chambers in Ibadan, Oyo State that the sealing of his client’s property by the Lagos State Government and police’s declaration of Alaka as a wanted individual were actions that trampled on his (Alaka’s) rights.

According to him, Alaka had already instituted a case against the IG and Imohimi at the Federal High Court, Lagos State Division, adding that the Lagos CP was after Alaka because he had “an axe to grind with him.”

He said, “We affirm that originating processes in the matter have been served on the respondents since August 2017 and this case had come up for hearing once before a vacation judge and twice before Justice Hassan of the Federal High Court, Lagos Division.

“The respondents were not only absent on those occasions but have failed, neglected or refused to file any processes in response to our client’s case against them.

“It is shocking how the respondents have again come to the public declaring our client, who is an applicant before a superior court of record, wanted over the allegation of Badoo cult killings.

“Even though we are putting our papers together to seek a legal remedy against the unlawful sealing of our client’s property, we have resolved to exhaust all available administrative remedies in the light of the recent events that have concretised our suspicion that Imohimi has a personal axe to grind with our client.”

Alaka’s counsel said that one of the requests in the petitions was to establish an independent investigating team, which would be free from the control and supervision of Imohimi.

According to him, such a team should look into the allegations levelled against his client. He added that there were several issues attached to the case and that would be exposed once an independent body took control.

It would be recalled that the Lagos State Police Command had declared Alaka wanted “in connection with series of well-orchestrated killings and nefarious activities of the Badoo cult group” two weeks ago.

While he was declared wanted, an event centre and filling station owned by him were shut down by the state government.

Alaka, 51, was alleged to be a prime suspect in killings believed to have been perpetrated by the dreaded Badoo cult in Ikorodu area of Lagos.

The cult was known for its peculiar way of killing by smashing the heads of its victims – whether child, woman or man – with mortars, pestles or large stones.

Such killings gripped the Ikorodu area for many months in 2017 fuelling rumours that the killers sold handkerchiefs used to clean the blood of victims to ritualists.