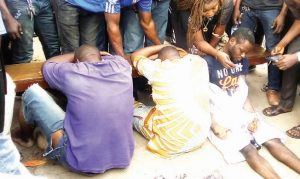 An eighteen year old identified as Chibuzor Igwe, said he was tried into joining Badoo Cult, Chibuzor was one the five Badoo cult suspects paraded on Thursday at the Lagos State Police Command Headquarters in Ikeja.

Igwe explained that he had approached one of the alleged leaders of the cult, Obamoyegun Omotayo, for a driving job, but was lured into the gang.

Chibuzor said, “I am a Badoo member. Around November, I told Obamoyegun (Omotayo) that I wanted to be his driver because I saw him with new cars. He told me that it would take some time before he would give me the job. During that time, he called me….”

But what could have been a full-blown revelation from the teenager, who has injuries on his hands, was aborted by the state Commissioner of Police, Edgal Imohimi, who stopped the interview and ordered that Chibuzor and the other suspects be taken away.

Imohimi claimed that the suspects’ confession would jeopardise police investigations and efforts to arrest other members of the gang.

Earlier, while briefing journalists on the arrests, the CP identified other Badoo suspects as Chibuzor’s elder brother, Uche Igwe; a welder, Samuel Akaeze, aka Samito; his wife, Gift Akaeze; and a herbalist, Fatai Adebayo, aka Adaripon.

According to Imohimi, Gift provides information on the targets whom the assailants consequently attack.

He said Chibuzor was apprehended while he wanted to escape from Alabo Street, Abule Osorun, Ibeshe, Ikorodu, where the gang smashed the heads of a couple and their five-month-old baby on December 30, 2017.

He said, “The gang of three murderers comprises Chibuzor Igwe, Samuel Akaeze, aka Samito and Obamoyegun Omotayo. Omotayo usually sprays a powdery substance into victims’ dwelling places that would make them to fall into deep sleep before they end their lives by smashing their skulls with grinding stones.

“Omotayo, having satisfied that the victims are dead, will use white handkerchiefs to mop their blood for ritual purposes. However, luck ran out on them when one of the victims raised the alarm which attracted the local vigilance group. The group in turn alerted the police in that area and the compound was cordoned off, leading to the arrest of Chibuzor Igwe at the scene.

“Also arrested is one Gift Akaeze, wife of Samuel, who provides information about where to strike for the group.”

Imohimi said Chibuzor confessed to being a member of the ritual gang and gave the police information that led to the arrest of Samuel and Omotayo.

He said a bloodstained grinding stone, suspected to have been used by the suspects, had been taken to a laboratory for forensic analysis.

Why FG Is Borrowing To Expand Infrastructure – Fashola