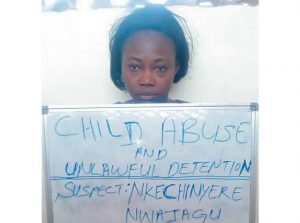 A  banker identified based Nkechinyere Nwajagu, has been apprehended for  locking up her 11-year-old house maid, Precious Nwafor in the house while she travelled for Christmas celebration in the village.

Nwajagu told investigators that she is a native of Ajali in Orumba Local Government Area of Anambra State.

Neighbours alerted law enforcement agents when they found the girl locked up in the house all by herself at 12 Baderin Street, Mafoluku, Oshodi area of Lagos.

The child was locked up in a poorly ventilated room without food.

The alert by neighbours prompted the Commissioner of Police, Lagos State Command, Edgal Imohimi, to lead a team to rescue the girl.

At the scene, Imohimi, ordered that the iron bars on the windows be cut open to help extricate the child.

The child, who is from the same state as Nwajagu, said she was brought to work as a housemaid in Lagos with a promise of better life.

The police have handed her over to the Social Welfare Department of the Lagos state Government.

On Friday, Nwajagu was said to have reported herself at the Makinde Police Station, Oshodi. She was detained and later transferred to the Human Rights Section of Lagos State Police Command, Ikeja.

According to the suspect, it was her elder sister, who brought the girl from the village and left her in her care when she travelled home for Christmas.

She said she had no choice but to lock the child in anytime she went to work until she returned at night.

Nwajaguwas subsequently charged to court and arraigned on charges of child abuse and unlawful detention.

Meanwhile, Imohimi has warned against the abuse of children and women in the state. He said the command would keep an eye out for the abuse of vulnerable members of the society and would not hesitate to prosecute culprits.