Home News Feed Because Of SARS, My Dream Of Becoming Accountant May Die With Mum...
Facebook
Twitter
WhatsApp 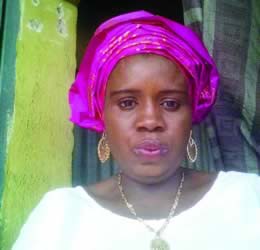 16-year-old Muiz Adeyanju is the first child of 42-year-old Asiata Adeyanju who was killed by men of the Federal Special Anti-Robbery Squad.

The yooung boy now says the officers may have killed his dream of becoming an accountant after killing his mother who promised to sponsor him.

According to Punch Metro, the 16-year-old, who just finished secondary school, said the mother had wanted to register him for the Unified Tertiary Matriculation Examination last Thursday but she died the previous day.

This is just as the family’s neighbours on Ajenifuja Street, Ilupeju, Lagos State, asked the police authorities to fish out and punish the policemen who triggered her death.

Some policemen had reportedly raided Ajenifuja Street and environs around 10pm on Wednesday in a white bus without a number plate.

They were said to be dressed in black vests with the inscription, FSARS, and armed with guns.

Punch Metro reports that there was power outage in the neighborhood around that time and Muiz went out to turn on a generator.

He was about to start the generator when two policemen accosted him.

All entreaties by his parents’ neighbour, one Okparagunure Freeborn, that he was not a criminal, fell on deaf ears, as the operatives whisked him away in the bus.

Muiz’s mother, who was reportedly hypertensive, became confused on hearing the news.

She was running after the policemen when she slumped.


She was said to have been rushed to a private hospital in the community where she was confirmed dead.

In an interview with our correspondent on Friday, Muiz, who fought back tears, described his mother’s death as devastating and a big blow to his future and those of his siblings.

He said, “My mother and I were very close. When I finished secondary school last year, she enrolled me for a computer training programme pending when I would gain admission to a higher institution. She had a lot of plans for me. She said I would register for UTME on Thursday.

“Life will be miserable without my mother. I can’t do anything without my mum. I want the police to investigate and bring those policemen to book. They have killed the dreams my mother had for me and my siblings. I told her I wanted to study accounting and she promised to give me the necessary support.”

The distraught widower, Musediq Adeyanju, also lamented that the conduct of the policemen had wreaked havoc on the family, saying he had no inkling of how to cater to their children alone.

The 42-year-old artisan said he and other residents reported the case at the Ilupeju Police Station, but the Divisional Police Officer denied knowledge of the raid.

He said, “When I returned home from work that evening, we ate together. When I finished eating, they were watching television while I went outside to pray. There was outage and Muiz went out to put on the generator.

“Suddenly, I heard some noises. I thought people were chasing thieves. A neighbour rushed to where I was praying and said policemen were taking Muiz away. I alerted his mother too and she came out. We trailed their vehicle, but did not find them.

“We returned home together to arrange for a car to chase them, but people advised against it. I told her to wait for me while I went with others in search of the policemen. We were on it when some women brought her to where I was, saying she slumped at Adesiyan Junction.

“She could no longer breathe normally. Some people rushed her to a hospital while I went to Ilupeju Junction, where a neigbour said she saw the policemen. I pleaded with them to release him. They said they would have left, but for their colleague who they were waiting for.

“It was when I told them that his mother was in a coma that they released him. They were in a white bus without a number plate and FSARS was written boldly on their vests. They didn’t tell us where they came from.

“By the time we got to the hospital, her condition had worsened. She died at night. The children are too small for this. I don’t know where to start from. I want justice.”

A resident, Okparagunure Freeborn, said he had just alighted from a motorcycle on his way from work that evening when he met the policemen holding Muiz.

He said he tried to explain to them that Muiz was his neighbour’s son, but they silenced him with several slaps.

“They wanted to take me away too, but I refused to go with them and told them I am a teacher. Two of them that came out of the bus were armed. I was shouting, but people did not come out on time. I believe the police can fish out those policemen. The SARS should check their records to know the policemen on patrol that day,” he added.

Another resident, Odetunde Olaseni, said the SARS men had raided the community about two weeks earlier.

He said he suspected that the policemen were on an illegal duty and urged the Lagos State Police Command to bring the erring officials to book.

A friend of the deceased, Mrs. Oluwakemi Ogunkanmi, said bringing the policemen to book was the only way to assuage the pains of her family and friends.

She said, “She was my close friend and a caring mother. She had told me earlier that day that I would follow her and Muiz to a café where he would register for the UTME. She had great plans for her children. Her children were her first priority.”

The Lagos State Police Public Relations Officer, SP Chike Oti, could not be reached for comments as calls made to his line rang out.