Postpartum Depression is a type of mood disorder associated with childbirth. Symptoms may include extreme sadness, low energy, anxiety, crying episodes, irritability, and changes in sleeping or eating patterns. Sadly, a lot of women don’t know this exists and often times when they have these symptoms, they hate themselves thinking they aren’t mother enough. Bolatito Ladoja-Idakula, Nigerian singer Bez’s wife, has joined women lending their voices on PPD and helping educate other women.

In her reaction to writer, Ese Walter-Ark’s post on postpartum depression, Bolatito wrote about being unhappy and feeling horrible about it, snapping at her son, not getting enough sleep etc.
She concluded by saying that ‘more women need to know that they aren’t alone in this and speaking up is also key to healing. 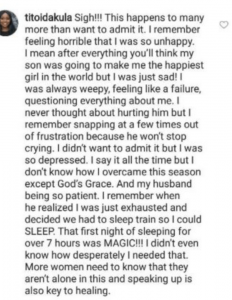