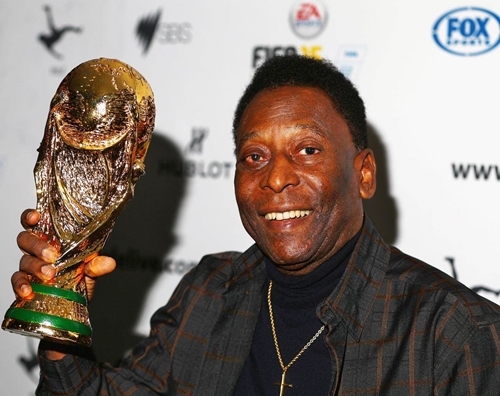 Pele is widely regarded as the greatest football player of all time (Photo: Getty Images)

Brazilian football legend, Pele is in hospital after he collapsed on Thursday with severe exhaustion, The Independent UK reports.

The 77-year-old was due to travel to London this weekend for a dinner held in his honour by the Football Writers’ Association (FWA).

However the three-time Fifa World Cup winner collapsed before his journey and was taken to a hospital in his native Brazil.

“In the early hours of Thursday morning, Pele collapsed and was taken to hospital in Brazil where he has undergone a series of tests which appear to point to severe exhaustion,” a FWA statement read. “He remains on fluids while doctors monitor his recovery.

“Thankfully, there is no suggestion of anything more serious than exhaustion and everybody at the Football Writers’ Association wishes Pele a swift and full recovery.”

Pele has been taken to hospital for kidney and prostate problems in recent years, and in November 2014 was treated for a urinary infection after having kidney stones removed.

In a glittering 21-year career, he scored 1,281 goals in 1,363 appearances for club and country and was named by Fifa as their Player of the Century.

The FWA statement continued: “Understandably, his medical situation prevents him from travelling to London for the Football Writers’ Association Tribute Night on Sunday evening at The Savoy. But after discussions with Pele and his team, he has insisted the event should continue, not least because many of Pele’s friends are travelling from overseas to be with us on Sunday.

“While it is incredibly sad Pele cannot attend the function, the FWA are grateful that all those who have been asked to pay tribute on the night – Gareth Southgate, Cliff Jones, Gordon Banks and Steve Hunt – are determined to help make the evening a memorable one.

“Pele’s team have also asked that we film the event and send a copy to Brazil in the knowledge it will lift the great man’s spirits to see his friends are thinking of him and sending their best wishes. With that in mind, we want to do Pele proud and make Sunday night as memorable as possible.

“It goes without saying, Pele has an open invitation to any of our functions once he regains his health and we are already discussing the possibility of him joining us in May for the Footballer of the Year dinner.”