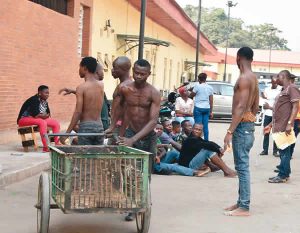 The suspects were apprehended on Wednesday by the government officials during a raid on the Itire area, it was learnt that 150 waste carts were also impounded during the operation.

The LAGESC Corps Marshal, Daniel Isiofia, who confirmed the incident, said the agency had got information that some residents were indiscriminately dumping refuse at undesignated sites.

He said investigation by officials confirmed the report.

He said, “Recently, there has been a clamour for a cleaner Lagos and the state Governor, Akinwunmi Ambode, has been very keen on making Lagos clean. To this end, he gave us a mandate to ensure that Lagos is kept clean by ensuring that acts that make the city dirty are curbed.

“We know that there have been massive efforts to clear the backlog of refuse on the roads and our men went on surveillance and eventually discovered where the cart pushers were operating on Ogunlana Street by Ogbomosho in the Itire area. We raided the area and saw the cart pushers, whose job is to collect refuse on payment from some residents who feel that they cannot dispose of their refuse according to the government directive and instead dump on road medians and canals.

“So, with the determination to stop this menace, we raided the area at 4am (Wednesday) and succeeded in impounding 150 waste carts used for this purpose and arrested 11 suspects, while others fled.”

Isiofia, a retired Assistant Commissioner of Police, advised residents to desist from indiscriminate dumping of refuse in public places, as well as patronising cart pushers, saying such were against the law.

He vowed that ongoing efforts to stop the menace would be sustained.

“We are going to sustain this process. Operators of waste carts should know that Lagos is not a place for them. They should leave Lagos or look for another job.

“And if we get those patronising them, we will charge them to court, because they are falling foul of the law,” he added.