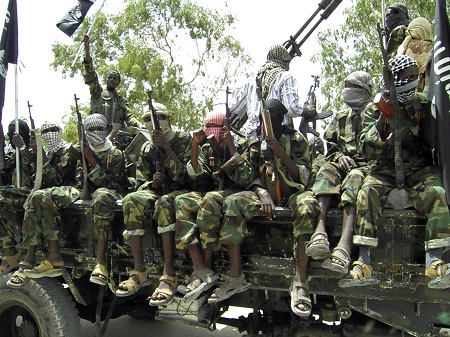 Residents and local officials have said that no less than five people were feared killed Friday by suspected Boko Haram insurgents in an early morning attack in Kaya village of Madagali in Adamawa.

According to Premium Times, Kaya is one kilometer drive from Gulak, the administrative headquarters of Madagali.

Residents say soldiers and local hunters who chased the insurgents were able to shoot two of them dead.

A fleeing resident, Baba David, said, ‘’the rampaging Boko Haram attacked Kaya village, at about 10 p.m. and had a field day for almost three hours, no response.

‘’They killed five people before fleeing to their hideouts unperturbed. It’s so sad that no response from security personnel deployed to man our areas.

‘’Kaya is just one kilometer away from Gulak, where soldiers and other security stations. Though local vigilantes later came and pursued the insurgents,’’ he said.

The chairman of Madagali, Yusuf Muhammad, also confirmed the incident but said he had no details yet.

Mr. Muhammad said information reaching him was that people lost their lives, while security and local hunters were in pursuit of the terrorists.

Confirming the attack, a member of the House of Representatives, Adamu Kamale, said: ‘’I got a distress call early morning that they (Boko Haram) struck again in Kaya village, killing at least five people and others injured.

‘’The recent attacks indicate the group is still able to carry out major attacks and has not been defeated despite the successes achieved by Nigerian soldiers in the war.

‘‘You know our communities are a stone’s throw from the boundary of Sambisa Forest, the insurgents’ safe haven from where they launch attacks on us,’’ he noted.

Mr. Kamale, who spoke on telephone on Friday, said while the military continued to make claims of ‘decimating’ the insurgents, the situation in Madagali had been “seriously underreported” in a series of security reports filed by the military to Mr. Buhari.

“The truth remains that the group is still very active in our areas,” the lawmaker said.

‘’We are calling on Mr. President not only to match words with actions but should endeavour to come and see our plight, because the insurgents are truly killing more people than he is even aware of, particularly in Michika/Madagali local government areas of Adamawa State.”

Madagali is one of the frequently attacked major towns in the northeastern state of Adamawa by Boko Haram insurgents.