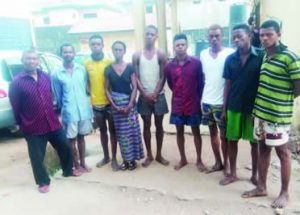 The Imo State Police Command have arrested 10 indigenes of Umuoma-Nzerem, in the Ehime Mbano Local Government Area of the state, for allegedly setting ablaze a primary school headteacher, Cosmos Iwu.

Some youths of the community had on November 30, 2017, set Iwu ablaze after stripping him naked and dragging him around the community.

According to the youths, Iwu, who was set on fire in the presence of his wife and children, was retarding the growth of the youths of the area through diabolical means.

According to a police source, apart from the president general of the community, who had been arrested, about 10 indigenes, including the prime suspect, Margret Nwoke, 40, had been nabbed for the crime.

He said, “After painstaking investigations, the community was raided by FSARS operatives, led by their commander, Godfrey Victor, a Superintendent of Police.

“Th majority of those who participated in the gruesome murder were rounded up; some are still at large.

“We have ample evidence, including video clips on how the jungle justice was administered on the man in the presence of his children. It is barbaric and unfortunate.”

Confirming the arrests to our correspondent on the telephone, the state Commissioner of Police, Chris Ezike, said investigations were still on, adding that the fleeing suspects would soon be arrested.

Ezike said murder was a grievous offence under the law, adding that the command would ensure that justice was done.

“We have recorded a significant breakthrough in the matter; we have arrested 10 persons in respect of the killing of the primary school headmaster by his kinsmen.

“We have not closed our investigation; we will still get those on the run and we will charge them to court with murder,” Ezike added.

The Miyetti Allah Kaute Hore says the regional southwest security outfit, Amotekun is a plot against the Fulan, and has asked the federal government...
Read more