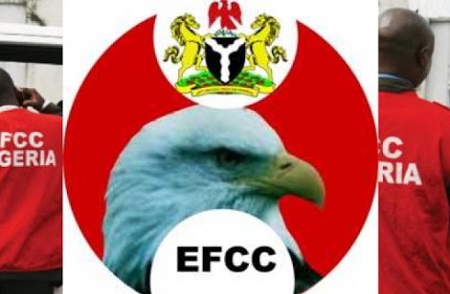 The Economic and Financial Crimes Commission (EFCC) has traced N3.12billion to the bank account of a company allegedly owned by a Special Assistant to a former National Security Adviser, Col. Sambo Dasuki (rtd).

The sum is suspected to have been diverted from about N36.4billion voted by the Goodluck Jonathan administration for the protection of dams, wells and sources of water in the North-East against being poisoned by Boko Haram.

Investigation by the EFCC shows that only N3.12billion of the N36.4billion was paid to a company allegedly owned by the suspect.

A review of the company’s account suggests that the cash may have been used for “political and personal patronage.

Detectives of EFCC are working on the theory that the N3.12billion was shared by politicians, friends of the government and relations of the former NSA.

It has already set up a team to interrogate suspected beneficiaries of the N3.12billion to explain the services rendered to deserve such a huge payment.

The balance of N33billion which is supposed to be in an account domiciled in the Office of the Secretary to the Government of the Federation (SGF) is yet to be traced. It was operated by the Office of the National Security Adviser (ONSA).

The Nation gathered that sometime in 2011, ex-President Goodluck Jonathan received a memo alleging threats by Boko Haram to poison all the dams, wells and sources of water in the North-East and other insurgency flashpoints in the country.

Although Jonathan initially ignored the memo, it was exhumed in March 2014 by the Office of National Security Adviser (ONSA) when the insurgency got ferocious.

The memo recommended the need to protect the sources of water in the North-East.

Investigators of the alleged diversion said: “Following the delay in attending to the request, a fresh memo was raised in March 2014. At the end of the day, about N36.4billion was approved and released to ONSA through the Naira account maintained by the Office of the Secretary to the Government of the Federation but operated by the ex-NSA and the Permanent Secretary, Special Services.

“From the N36.4billion, about N3, 125,000,000 were released to a company already traced to a former Special Assistant to the ex-NSA. Detectives have discovered that the balance of over N33billion was diverted.

“Even the profiling of the N3, 125,000,000 account of the slush company indicated that the cash was used for political and personal patronage including transfer to some relations of the ex-NSA.”

A highly placed source in EFCC confirmed yesterday that operatives “are working round the clock to track the whereabouts of over N33billion because no contract was executed for the protection of the dams and other sources of water in the North-East.

“As for the beneficiaries of the N3.125billion, we are already on their trail through bank records, accounts and Bank Verification Number (BVN) which have proved useful to our operations. We will ensure the recovery of the diverted funds.”

The latest bend of the investigation also showed curious spending of N20billion by ONSA between March and May 2015.

It was learnt that detectives claimed that “the purpose of the cash withdrawals from the government’s account was unknown.”

Sources said: “Immediately after the Presidential Election on March 28, 2015, ONSA requested for another N10billion to prepare for the Governorship Election on April 11. It was approved again by the ex-President.

“And in May 2015, another N10billion was approved and released to ONSA. All these funds were remitted to ONSA outside the budget allocated to security agencies for the 2015 General Elections.

“Our operatives are investigating the rationale behind these releases; how the funds were diverted; culpable officers and how to recover the cash.

“So far, our team of investigators cannot trace any project executed with the N36.4billion to protect water sources from being poisoned by Boko Haram.”

Responding to a question, the source added: “About one and half years after the N36.4billion were withdrawn, the Nigerian Army on September 2015 confirmed that some sources of water in Borno State were polluted and poisoned by the insurgents.

“We strongly suspected that the votes for the protection of sources of water were diverted or converted into personal use.”

He said the insurgents had allegedly “poisoned cattle water ponds in Kangallam village along Marte and Abadam axis in Borno State where a large number of cattle died after drinking water from the ponds.”

“The action of the terrorists is no doubt aimed at taking their own pound of flesh on the innocent citizens and livestock as a result of the unbearable offensive operations through the combined effort of the Nigerian Army and the Nigerian Air Force to rout them out completely from their enclaves and hide-outs all over the North East.

“In view of this development, citizens are called upon to avoid as much as possible drinking water from unverified sources, especially in locations that troops routed out Boko Haram terrorists.”