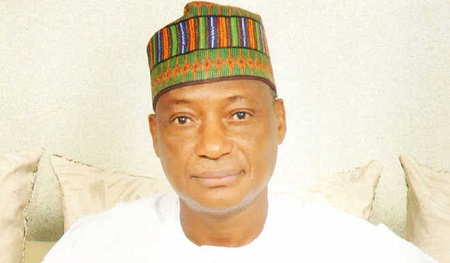 The Minister of Defence, Mansur Dan-Ali has been described as a disgrace to democracy by the Benue State chapter of the All Progressives Congress (APC), Saturday Sun has reported.

According to Saturday Sun, Dan-Ali was called a disgrace and told to resign for telling Nigerians and other members of the public that the attack on two communities in Benue that led to the death of over 70 innocent people and destruction of properties worth millions of Naira was as a result of the open grazing prohibition law enacted by the State Government.

“By this singular utterance, the Minister of Defence, Col. Muhammad Mansur Dan Ali (rtd) has inarguably displayed incontestable lack of the required sensibility and capacity to serve as Defence Minister in a country of over 180 million people with over 300 ethnic nationalities.

“As an integral part of the country, Nigeria and as a State that gave President Muhammadu Buhari an edge in the 2015 general elections, we demand that Col. Mansur Dan Ali (rtd) resigns his position as Nigeria’s Defence Minister immediately and tender an unreserved apology to the good people of Benue State and the country at large.” Yaro said.

The Party questioned the real motive behind Dan-Ali’s statement and demanded that he publicly explains to the party leadership why his reckless utterances should not be considered as a deliberate ploy to truncate the party’s victory in the 2019 general election.

“Through his statement, as an insider, Dan-Ali appears to have been contracted by the opposition to work against the APC. Minister Mansur apparently is one of those who are working against the unity of Nigeria and must be stopped now before he and others with such parochial, hateful, divisive and repulsive tendencies plunge the country into deeper crisis.

“In as much as we would not dignify Col. Mansur with obnoxious affronts, we would again want to inform him that he is not just an ingrate, but an unrepentant pathological opportunist who was in his farm working for the PDP when many of us toiled the nooks and crannies of this country to ensure victory for President Muhammadu Buhari in the election that brought him (Buhari) to power through which he (Mansur) is one of the biggest beneficiaries.” the statement added.

The party however declared its support for Governor Samuel Ortom, and reiterated its commitment towards making the open grazing prohibition law our number one priority in the State.