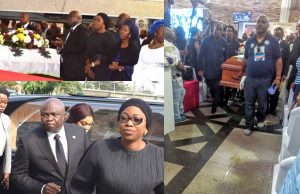 The remains of the Special Adviser to the Governor of Lagos State on Commerce and Industry, Deji Tinubu, was buried on Tuesday at the Vaults and Gardens, Ikoyi, Lagos.

Tinubu slumped and died last Thursday while playing a novelty football match in Epe, during the retreat of the Lagos State Executive Council.

Earlier, a funeral service was held for him at the City of David parish of the Redeemed Christian Church of God, Victoria Island.

At the church service were Governor Akinwunmi Ambode of Lagos; Governor Ibikunle Amosun of Ogun State; Africa’s richest man, Aliko Dangote; wife of the Vice President, Dolapo Osinbajo; a former Governor of Anambra, Peter Obi and members of the State Executive Council, among others.

At the Vaults and Gardens where Tinubu was buried, well-wishers, friends and others were in tears as the late sports icon was laid to rest.

Amosun eulogised Tinubu and lamented that he died on his birthday.

Can Novak Djokovic land rare ‘Calendar Slam’ with a victory in US Open?

Why We Abandoned Negotiation With Kidnappers Of Students: Minister

Switch from Desktop to Mobile Pokies: What You Need to Know