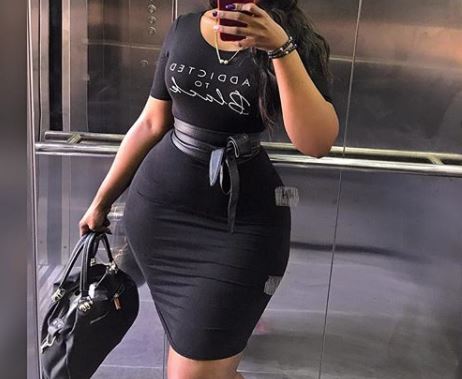 Passing through the mini-market at the Century area of Ago Palace Way, Okota/Isolo, Lagos State on a Saturday morning; Samuel Chekube’s eyes were travelling up and down the  numerous small shades of food materials like he was about to steal something.

Samuel, a young man in his mid- thirties wasn’t focused on his shopping list. He was distracted by the massive backsides paraded by the majority of the light-skinned Igbo women and few Yoruba ladies thronging the market place for business.

According to the picture painted by him, some bums were so gigantic that you would think the carrier needs help. You would wonder how the lover of the woman copes with the management of such natural assets at night after the hustling and bustling associated with Lagos.

“This is why the mortality rate among men is high here (Lagos), after facing so much stress at work, they put up with stress again in the other room and some of these women have high libidos” he said to himself teasingly.

Sighting-seeing for randy men is the only positive thing about the mini-market where prices of goods are selfishly tampered with by sellers without due consideration of the harsh economic realities on ground. It’s always like a contest of buttocks on weekends with some bums vibrating in such a way that your phone network could be interrupted. Samuel described something close to the popular Miss Bumbum contest annually organized in Brazil.

“The bums send disrupting signals to the brains and other devices. I am talking about the kind of interference that could make your movie download of a 400mb file on Toxicwap fail at 99%” Samuel joked while narrating his experience to this reporter.

His head was filled with raunchy imaginations as he bought some vegetables, cow meat and other ingredients for his Egusi soup. The lanky and innocent-looking man had recklessly slept with over 15 women in the market without protection in his mind. The power of imagination could be real but ‘if wishes were horses, beggars will ride’.

Samuel knew he was in trouble; he has been cursed with a manhood that is as recalcitrant as the missing leader of the Indigenous People of Biafra, Nnamdi Kanu. A protest of Palestinian standard began between his legs as ‘Mr. John Thomas’ begged for appeasement with one of the curvy women he fantasized about at the market place. Before he knew it, there was a bulge between his legs and he had to make a quick adjustment to his walking steps to avoid attracting undue attention from impatient customers competing for the right of way.

When Samuel retired to his two-bedroomed apartment which was walkable to the market, he felt he was on fire. A state of emergency needed to be declared around his waist region. The memories of his past fun moments with ladies started playing back alongside his fresh experience with the ladies at the market place. He tried to take a nap but his manhood took a military position like Nigerians soldiers guarding the Internally Displaced People’s camps in Borno State, north-eastern part of Nigeria.

He grabbed his mobile phone and dialled the numbers of some ‘freelancers’ who do home deliveries. For novices, freelancers can be respectfully called pleasure workers or ‘substitutes not prostitutes’ who offer s*xual services to nearby clients on a part time note. They have normal lives as well as serious boyfriends but mostly sell their bodies to cater for immediate needs like shoes, clothes, make-up materials, social events and mostly smartphones. A couple of numbers he had failed and a few who picked were probably engaged with other guys.

He desperately logged into to Insta Messenger on his Android phone to fish for a new girl. Insta Messenger showed him some of the ladies around his place at Ago Palace Way and he started messaging them but the response rate was slow. As he paced all around in house in exasperation like someone who swallowed a mortar, he later got a notification on his phone about a message on the application. He checked and read a response from one Blessing, a light-skinned full-figured lady of average height who was heavily endowed on both sides. She displayed a picture of her humongous bum on her profile to attract interested men and it worked like Merlin’s magic.

Samuel: Where are you?

Samuel: You do hook ups?

Samuel: Can we meet?

Blessing: Yes, where do you stay?

Blessing demanded a whooping sum of N15,000 for just two quick rounds of s*x. Samuel, a salary earner knew that would be disastrous to his slim bank account as the Yuletide had just ended and the month of January was expected to be a long one. He tried negotiating with her but Blessing settled for N8,000 which was higher than the general N5,000 charged by her colleagues for such dalliance.

During the course of the negotiation, Blessing flared up claiming she doesn’t hustle on a full time note. A narrative told by girls of her class to attract respect from prospective clients. Blessing pulled the plug on the deal and it was over. Samuel’s manhood which had since won independence since 1960 admonished him to meet her price but he wouldn’t dare as he expended much of his monthly salary during the Christmas and New Year celebrations.

That night’s sleep was rough for Samuel, his testosterone kept erupting and causing him hallucinations. It was his manhood that woke him up on a Sunday morning as early as 6am. The early morning erection couldn’t be quenched by urination. It was firm and fierce after he used the rest room. He went on Insta Messenger again for any feedback and he got a message from Blessing and other ladies. Blessing’s message was; “Ok…do you want it now?” indicating a U-turn from her. He swiftly replied; ‘Yes’. She dropped her number and Samuel rang her. She asked if he was staying alone and she got the directions to his house.

Samuel searched for her phone number on Facebook and was able to discover her profile. She was seen in her normal self. She qualified for a young ‘Slay Queen’ with about 4,993 friends on Facebook with 1,896 followers as at press time. She entertained them with not-too-sultry photos but suggestive postures that were alluring.

Samuel later read that she is a student of a university in the Niger Delta region (name withheld) where she studies Theatre Arts. As he looked through her numerous pictures, he noticed she was at place that looked like a club house the previous evening. Her pictures were indeed enchanting and he fantasized about s*x with her as he impatiently waited with an erection just as if his manhood had eyes to admire the pictures.

Samuel’s phone soon rang and it was Blessing, she was already at the gate. Samuel’s had a couple of neighbours who crowded the compound that morning. A man of Igbo extraction had a thanksgiving programme to sponsor at a nearby Catholic Church that Sunday morning, so his wife was doing some cooking within the compound while other women supported. It was a difficult time to ‘smuggle’ a girl into the house. Samuel hated being seen with freelancers. He believes no matter how decently they tend to dress, smart men always decode their real identities.

“It’s very easy to know a girl that sells if you are in the know. From tattoos to leg chains, indiscriminate chewing of gum, revealing clothes, tinted hairs, weird eye-lashes etc…. It’s like they have identity cards invisible to them. A he-goat can never hide its custom odour when it passes by” he explained amidst laughter.

Samuel happens to be a very secretive guy and a loner. He dashed out of his flat to pick Blessing, he exchanged pleasantries with his neighbours as he approached the gate. He soon saw Blessing approaching in a red and skin-tight gown seated on a commercial motorcycle. She was indeed heavy-chested with a bum that could be termed a truck. The Hausa gateman gazed at her and Samuel intermittently as if he was expressing desires about what he saw.

Samuel tried to create a distance between him and Blessing as he led her to the ‘slaughterhouse’. There was a pin-drop silence as neighbours saw Blessing. An elderly neighbour who was married forgot to return his greetings as he had his eyes glued to her. Samuel wasted no time as he led Blessing to his room. He transferred the money to her before service via his bank application. She was keen on seeing the alert before service while Samuel was already Unclad with his manhood erect like the AK-47 paraded by killer Fulani herdsmen.

“This is big oh. What is thus? Nawa oh” Blessing said in astonishment as she gazed at his manhood. She pulled off her clothes completely and it was as if the size of the bum doubled. She had a waist bead which complemented her tender skin. Samuel took on her from behind as she mounted the bed.

After reaching climax, the scale fell off the eyes of Samuel as Blessing lay naked on his bed with an electric fan blowing her speedily. He remembered his girlfriend who was out of town and his heart broke. He felt empty deeply but according to him, his manhood was very grateful for such a pleasurable treat.

“I am leaving Lagos next week. My school has resumed and I will be travelling back” Blessing said after initially claiming her name was Sandra. Samuel immediately felt pity for her boyfriend who might never know her dark secrets. As they waited for the second round as agreed, she was already fixing another appointment with another client who was impatient about his package. Her innocent looks betrayed her actions as she appeared like someone who wouldn’t finish a bottle of Coke.

Samuel mounted her again the missionary way and she dashed into the bathroom after, cleaned up like nothing ever happened and put on her clothes. Her phone rang again, it was the impatient client going by the nature of their conversation.

“Are you at the hotel premises? I will be on my way now. It’s just a matter of minutes.” She wagged her round hips and headed for the door. Unto the next one!

“I need to go for a rehabilitation oh….I will need someone like T.B Joshua to lay hands on me or maybe I should be taken to a Celestial Church where they can flog some 52 demons out of me like Pastor Humble promised Daddy Freeze” Samuel joked.

“On a more serious note, loneliness causes me to misbehave as a bachelor. Life in Lagos is lonely. Friendship is calculated along economic lines. People only visit you when they have something to gain. I need a fresh pastime.” He continued.

Samuel is hoping to get married this year, 2018 to curtail his excesses. He convincingly believes that the step would trigger a revival in his life.