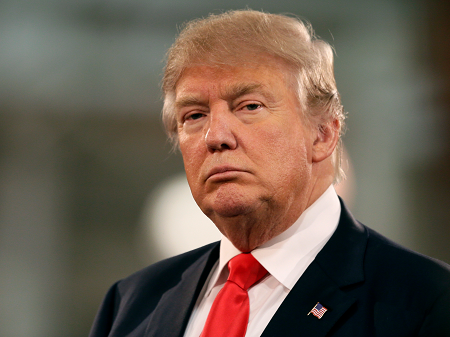 It is 12 months since he rumbled into the White House, seat of the American government. And in 12 months, he has tumbled just about everything. His name is Donald Trump, president of the most powerful nation on earth.

But Americans are sadly not celebrating the Trump administration. Reason: Trump has proven that disaster doesn’t take long to happen; one year is enough for an administration to manifest full-blown insanity!

In 12 months, the ‘tweeting’ president has led his country to an unprecedented government shutdown; women are on the streets of major cities, chanting songs, clutching placards and denouncing what they describe as “the worst government” in American history, and Trump as “worst president” in its history.

It’s a sea of female heads on the Cable News Network, CNN. One commentator described what is happening in America as Trump marks his turbulent one year in office as a “political movement that will alter the electoral process,”  in the near future.

The American women protest reminds one of the Aba women’s uprising of 1929 against taxation, and the Egba women’s protest led by Fela’s mother, the iconic Mrs. Funmilayo Ransome-Kuti, which led to the deposition of the Alake of Egbaland.

Trump has literally set his country on fire, as the whole world keep asking:  How did America end up with a man who threatens world peace by seeking to provoke a fresh nuclear war? How did God’s own country end up with a leader with neither finesse nor decorum in relationships with persons and nations? How did it end up having a man who abuses other countries, derogatorily dubbing them “shithole”? How can such a foul word spew from the mouth of a man who leads a country as sophisticated as the United States of America? Questions, many question.

But, has the turnout of the Trump presidency truly come as a shock to Americans and the rest of the world? No, I don’t think so. His was a disaster waiting to happen; a prophecy foretold. When he emerged president in November 2016, I wrote on the Trump triumph, which I titled: “TRUMP:  A WAKEUP CALL FOR AFRICA.”

I said Africa and the rest of the world should brace up for a bumpy ride. We’ve got more than a bumpy ride in just 12 months. Please, go ahead, and enjoy the piece first published November 14, 2016…

“What’s wrong with Donald Trump? I can hear many voices: Racist, misogynist, rude, crude, irreverent and many other negative adjectives. But whatever anyone thinks of him doesn’t matter much now:  He’s America’s president-elect, and by January 20, 2017, he will be formally assuming duties as leader of the world’s most  powerful nation, which makes him the most powerful man on earth.

“That’s what they call the majesty of democracy. It doesn’t matter if the man is a moron or imbecile; urbane, cultured or polished.  Once the process has been concluded and a winner emerges,  that’s it. What can anyone do to alter what democracy has ordained? What will the protests and yells do, other than to draw attention to the weakness of a system that throws up a winner that may not have won the minds of majority of his citizens?

“Democracy, in this case, defies logic because it is largely illogical: A candidate wins popular votes, but loses the election because of a process within a process called the electoral college, which specifies the spread of votes and the minimum votes that decides the winner.

“Truly, Trump defied bookmaker’s prediction, pooh-poohed media permutations and endorsements to shock his fellow Americans and the world. Many haven’t quite recovered from the shock of Trump’s victory, and may not easily recover from the prospect and reality of a Trump presidency.

“Trump was the unlikely choice; the unappealing guy, many thought was just clowning. The loud-mouthed dreamer, not the dream of the American people enamoured of oratorical prowess, dash and sophistry of their leaders; the cultivated mind, the logical thinker, the global citizen, cosmopolitan in thought and outlook.

“But Trump was different. He spoke different. But got the same result those who were different from him didn’t get. That’s what the world hasn’t been able to reconcile itself to since November 8 when news of Trump-tornado hit everywhere!

“There are many reasons Trump beat the more-fancied and charismatic Hillary. But, let’s dwell on only one for the purpose of this column: He knew how to connect with his audience. He knew what they wanted to hear and drove it in.  He also knew how to swing the underdog syndrome to maximum advantage.

“The more he was pummelled in the media and everywhere, the more hearts he charmed. There had to be something special about the man everyone loved to hate. Some loathed him first, then fancied him later. The world loves the underdog; sympathy often goes to the man being hit by the bully or ‘lynch mob.’ The American media beat Trump to a pulp. Hillary Clinton stopped short of dubbing him a nit-wit, who had nothing to offer.  The world saw him as a sexual pervert, harassing and demeaning women. Trump could have been these and more. But in election matters, not many vote with their head.

“Then, Trump’s message seemed to hit at the core of what many native Americans  and whites had been nursing without the courage to say so. Here was Trump pledging to return America to Americans.  He talked about jobs and other welfare packages, which he said had been denied them, because immigrants, especially Africans (and Nigerians) had swooped on them. He promised to exit them, just as he had derogatory words for leaders of the black continent.

“To other parts of the world, including civilised Americans, what Trump preached was racist and crazy. But, also  to a large number of Americans, he hit the bull’s eye: Globalisation had diminished the American nation. To many who had the voter’s cards, the myth of globalisation has been diminishing in an increasingly shrinking global economy, recession and insecurity. It’s good to think and talk of America as ‘big brother’ shouldering the burden of the world, especially the poor, wretched nations of the earth. But, the reality is that, for over two decades, things haven’t been easy for Americans, especially those who believe they own the land. The resentment had been simmering. A candidate who pledged to recover what they believe was lost to ‘scroungers and scavengers’ from other parts of the world, especially Africa, was bound to get a good listening to.

“Of course, emotion had beclouded their sense of reasoning. Who could tell the bigots and supremacists that America was built by the sweat and labour of the despised immigrant, and nurtured by the African professionals, the abused Mexicans, the Chinese-American and all other races, who are still making their invaluable contributions to make America the world’s most prosperous nation?

“The day after election was when the folly of electing a man whose values many are still struggling to understand dawned on them:  A maverick –business, mouth-loose and brash. How would the world fare in the hands of a commander-in-chief who despises other peoples and nations?”

“Will he pull the roof, collapsing the fragile strings that bound humanity? That’s the fear all over as Trump gets ready to assume his mandate as world’s number one leader.

“Are there basis for the trepidation expressed over the Trump presidency? Of course, yes.  For Africa, generally,  and for Nigeria, in particular.  Trump’s message should be a wakeup call, for our leaders to get their acts together and brace up for a bumpy ride. Trump says he will send back our people. We should take that seriously. Even if he’s kidding, let’s not kid over the matter. Nigeria has over one million, if not more, of our citizens in the United States. We have accomplished professionals in almost every field: Scientists, doctors, engineers,  nurses, computer gurus, among others. If they all decide to return home or are forced out by President Trump’s policies, where would they fit in? Where would they start from?

“In a country still battling with rising unemployment index; social and infrastructural decay, we would face more difficult times if we don’t quickly roll our sleeves for the incoming Trump administration. The economy needs a jab. The broken-down infrastructure needs urgent fix. We must begin to look inwards rather than to the West for a bailout, which hasn’t quite alleviated our situation. We have to more aggressively go back to the land. Agriculture, agriculture, agriculture. Luckily, a few states like Kebbi, Akwa Ibom and Lagos are taking this sector seriously. Other states have to follow, if we must survive.

“Trump is no bad news, if Nigeria, indeed Africa, will see the blessing in disguise, which his emergence offers the country and continent. To be more self-reliant; to look more inwards for solutions to its many problems.  Trump has made it clear: Everyman for himself, God for us all. America may be God’s own country, but the blessings of the land are not for all God’s children. A word is enough for the wise!”