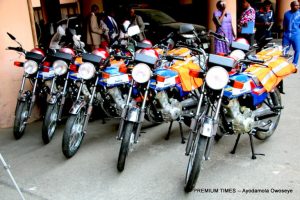 The World Health Organisation, WHO, donated 853 motorcycles to the Nigerian government to improve disease surveillance in the country.

The vehicles and other items were handed over to the Minister of Health, Isaac Adewole, by the WHO Country Director, Wondimagegnehu Alemu, on Monday in Abuja.

At the ceremony, Mr. Alemu said WHO was making the donation to help increase disease surveillance across the country, because surveillance is key in diseases control and eradication.

He said the motorcycles are to make the work of Disease Surveillance and Notification officers, DSNOs, easier as the officers play a major role in surveillance at the field level through visits to communities and health facilities.

“They also facilitate timely investigation and responses to outbreak of diseases where they occur. It is with this recognition of their role in disease control in the rural communities that WHO in partnership with other donor partners have provided the motorcycles to enhance surveillance system in Nigeria,” he said

Mr. Alemu, while urging for properly maintenance the motorcycles and their use for the stated purpose, said the DSNOs deserve to be provided with the most appropriate logistics to enhance their mobility across the country, including to the remotest parts.

The motorcycles will be distributed among the 36 states and the FCT.

In his remark, Mr. Adewole thanked WHO and the country director for the gesture.

He said disease surveillance was critical to public health maintenance and the donation signified that 2018 would be a good year for Nigerians.

Mr. Adewole said what is important for Nigeria is to get to know when and where there is disease, because when there is no prompt information, diseases spread.

“When we are able to detect and respond appropriately, we would be able to curtail the spread of diseases and maintain good health across the nation. We will be able to send officers there; we will be able to investigate and make appropriate diagnosis and be able to respond,” said the Minister.
L-R WHO Country Director, Dr. Wondimagegnehu Alemu and Minister of Health, Prof. Isaac Adewole during donation of 853 motorcycles by WHO.

He also assured that the DSNOs would use the motorcycles appropriately to help to detect the outbreak of diseases.

This, he said would go a long way in checking diseases and bringing health care delivery to the door steps of residents of the FCT.