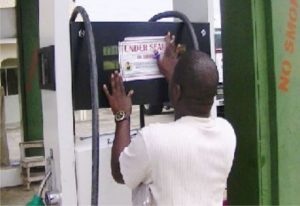 The Department of Petroleum Resources on Thursday sealed 24 petrol stations in Akure, the state capital and Ondo town for selling the Premium Motor Spirit, also know as petrol, above N145 per litre.

Since the fuel scarcity began, many filling stations in Ondo town are allegedly selling the product above N145 per litre.

Many of the sealed filling stations were members of the Independent Marketers Association of Nigeria, while some major marketers were still selling the product at the official pump price amidst long queue of vehicles.

In an operation that lasted for three hours, many filling stations were sealed, while DPR officials forced some stations to sell the product to the public at the normal price.

The DPR team, led by the Deputy Chief Officer, Mr. Stanley Okwekwe, said the exercise was carried out to ensure that the marketers sold the product at the official pump price.

The DPR boss also declared that the operation will be conducted on a regular basis in order to alleviate the suffering of the people of the state.