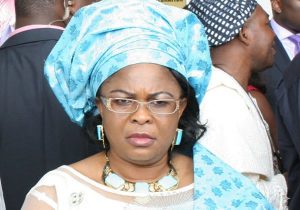 The Economic and Financial Crimes Commission (EFCC) has arrested the younger sister to Mrs. Patience Jonathan, the wife of the immediate past President, Goodluck Jonathan, over suspicious payments of N3bn made into her many accounts

The accounts, with a combined balance of N3bn, are in Skye Bank, Stanbic IBTC, Diamond Bank and Ecobank.

It was learnt that the suspect, Esther Oba, was arrested at the Nnamdi Azikiwe International Airport, Abuja, on Monday shortly after returning from Dubai with her husband and three children.

Mrs. Oba first came under the EFCC radar in 2016 when the commission was investigating Mrs. Jonathan.

The commission had discovered that an account with Oba’s Bank Verification Number bearing Mrs. Jonathan signature had a balance of $429,381.87 and subsequently froze it.

Subsequent investigations by the anti-graft agency showed that Mrs. Oba was the sole signatory to an account known as the AM-PM Global Network at Stanbic IBTC 0016971559 at Walter Carrington branch, Victoria Island, Lagos which received the sum of N317m from its Diamond Bank account 0026718889, being proceeds of unlawful enrichment derived by Patience who was then appointed a permanent secretary by the Bayelsa State Government.

However, Mrs. Oba continued to evade the authorities until Monday night when she was arrested at the airport.

An impeccable source at the EFCC said, “We had been looking for her for over a year because her name featured as the sole signatory to the account of one AM-PM Global Network, a firm under investigation for alleged fraud.

“When we could not get her, we alerted all security agencies and told them to put her on a watchlist and to inform us if she showed up at any port of entry. On Monday, we received word from the Nigeria Immigration Service that she came in with her husband and three children.

“We raced down to the airport and picked her up. She is still in our custody.”

In her statement of oath to the EFCC, however, Mrs. Oba said the firm originally belonged to her mother, Mama Charity Oba, who is now deceased.

The suspect added that only her brother, Mohammed Tamuno Tonye, knew the source of the funds and he is also dead.

A source at the anti-graft agency, however, said Mrs. Oba’s claims were hard to believe.

He said, “She said her mother, Mama Charity Oba, was the original owner of the firm. However, after her mother died a Bank Verification Number was needed, two directors of the firm, Gift and Mohammed Tamuno Tonye, wrote Stanbic IBTC saying Esther Oba should be the sole signatory.

“She took charge of the account on February 3, 2016 and between March and May of the same year, there was an inflow of N317m into the account. She said only her brother, Mohammed Tamuno Tonye, knew the source of the funds and he died a few months ago.”

It was learnt that another firm, Finchley Top Homes Limited, was also traced to Mrs. Jonathan’s sister.

Based on a board resolution entered into by one Ama Ada and Ama Emelia, Mrs. Oba was also made the sole signatory to the bank accounts of the firm.