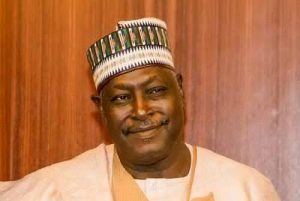 The Economic and Financial Crimes Commission (EFCC) has frozen some of the  bank accounts belonging to companies linked to the immediate past Secretary to the Government, Babachir Lawal.

A detective at the EFCC told newsmen that the account of Rholavision Engineering Limited, at Ecobank with number 182001809 which was incorporated by the former SGF in 1990 had been frozen by the commission.

The former SGF’s private account at Diamond Bank with number 0003004417 has also been frozen.

Lawal allegedly received kickbacks from contractors through the two accounts.

The detective said, “As part of investigations into the former SGF, we have frozen the accounts of his companies which he allegedly awarded a N223m consultancy contract for the removal of invasive plant species in Komadugu, Yobe Water Channels.

“We are also tracing several accounts where monies were paid into and will find out their role in the alleged fraud. No stone will be left unturned.

“The SGF is still in our custody but he is giving us full cooperation.”

The source said Lawal’s associates would be invited soon and would have to explain the process that led to the award of a series of contracts he allegedly awarded.

“The Lawal’s firm was established by Lawal in 1990 for the purpose of ICT and not for agro-business. So, his associates will also explain why they got a contract to cut grass. They will also be asked to provide evidence of tax payment and all other necessary documents.

Lawal’s detention comes less than three months after he was sacked by President Muhammadu Buhari for financial impropriety.

The EFCC is probing Lawal for allegedly contravening the provision of Part 1 of the Fifth Schedule of the 1999 Constitution (as amended); the Public Procurement Act 2007 and breach the Oaths of Office as the Secretary to the Government of the Federation.

Two separate committees headed by Vice-President Yemi Osinbajo and the Senate Ad hoc Committee had last year recommended the prosecution of all those involved in the alleged contract scam in the Presidential Initiative in the North-East headed by Lawal.

Apart from allegedly awarding a contract to his company, the former SGF also reportedly received kickbacks from PINE contractors, according to a Senate report.

Between March 29, 2016 and April 20, 2016, Josmon Technologies Limited allegedly transferred N317m to Rholavision after receiving two “grass-cutting” contracts worth N530.6m for the removal of invasive plant species in Yobe State, according to the Senate report.

The Senate report further states that on August 8, 2016, JMT Global Technologies Ltd. transferred N30m from its Zenith Bank account 114357188 to Rholavision shortly after getting eight contracts for rehabilitation and renovation in Adamawa State for the sum of N199.4m.

Also, Barde Brothers Multi-Services Limited which was also awarded seven contracts to renovate classrooms in Adamawa State for N145m allegedly transferred N71m to Lawal’s company account on October 10, 2016, and another N13m between July 7, 2016 and September 9, 2016 to his private account.

The report adds that Messrs Adamawa Boreholes and Drilling Companies Ltd. transferred N18m to the former SGF’s company, after getting a contract worth N54.8m to renovate seven classrooms at Yeskule Girls Secondary School, Michika Adamawa State.