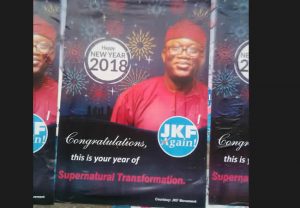 The posters of Minister of Mines and Steel Development, Dr. Kayode Fayemi, were sighted in Ado-Ekiti and some other towns in Ekiti State on Thursday.

Fayemi was governor between October 2010 and 2014. He lost the June 21, 2014 governorship election to the incumbent, Ayodele Fayose.

Although the minister is  yet to declare his intention to contest the July 2018 governorship election, observers say the posters might be a subtle beginning of his campaign.

The posters were produced and pasted by John Kayode Fayemi Movement, a pressure group supporting the minister.

The poster has the following inscription, “Happy New Year 2018, JKF Again, Congratulations, this is your year of supernatural transformation.”

Speaking on the development on Thursday, the state Coordinator of JKF Movement, Ade Kolade, said the posting of the posters was a gesture from the group to draft the minister into the 2018 governorship race.

He added that it was also to create awareness among the electorate on the need to give Fayemi another chance.

The JKF boss said the group had held rallies and met with the people at the grassroots on the need “to give Fayemi an opportunity to salvage the state from its current precarious situation.”

“The minister is not aware of our action, we did it on our own and we will continue to exert pressure on him to come out and contest the governorship seat again.

“We have been receiving feedback from all parts of the state where the people have seen the posters and the responses have been positive.

“We are using this forum to appeal to our honourable minister and former governor to come out again and vie for the governorship seat because he has the constitutional right to do so.”